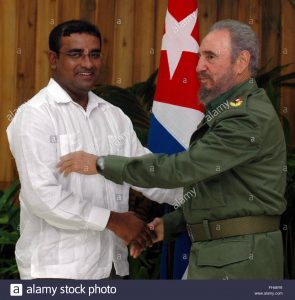 “We are deeply saddened by the passing of President Castro. His life was of significance not only to Guyana and the friendship that he had with Guyanese leaders but also to the entire Western Hemisphere and to the world,” Granger told reporters shortly after addressing Guyana Defence Force (GDF) troops at the end of their 51st anniversary route parade.

“It’s a sad day for the world. Fidel Castro was a statesman. He was an internationalist and because of his principles, he helped many developing countries particularly in  the Caribbean and Latin America in their tough process of moving forward,” Jagdeo told Demerara Waves Online News. “President Castro has always been helpful even before we gained independence and throughout all the years since we have been an independent nation,” he added.

Castro, who died at was 90 years old, was scheduled to be cremated on Saturday. Castro had been in poor health since an intestinal ailment nearly killed him in 2006. He formally ceded power to his younger brother in 2008.

Granger described Castro as the “best known Latin American.” “He certainly transformed politics in the Western Hemisphere and we would like to express our solidarity with the Cuban people in that regard,” the Guyanese leader added.

In 2001, then President Bharrat Jagdeo visited Cuba where Castro agreed to provide 1,000 scholarships to train 800 medical doctors and the rest in various fields of engineering agriculture, the construction and staffing of four diagnostic centres and the ophthalmology center and the supply of more than one million energy saving bulbs during a more than seven-hour long “interesting and informative conversation.” “I am just using this as an example of a developing country with many challenges yet willing to help others because of Castro’s philosophy and that’s why he’ll be missed not because of his physical presence but because of the symbolism of Fidel Castro and what he stood for,” Jagdeo said. 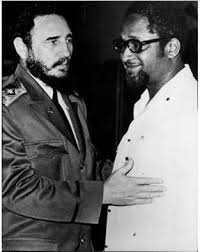 Guyana, together with Barbados, Trinidad and Tobago and Jamaica, broke off United States (US)-instigated isolation by establishing diplomatic relations with communist-ruled Cuba.

Guyana has over the decades benefited significantly from Cuban scholarships especially in training doctors and also the provision of members of the Cuban medical brigade.

Castro paid an official visit to Guyana in 1973 and then Prime Minister Forbes Burnham reciprocated in 1975.

Back in 1975, Guyana had provided landing rights to Cuban military aircraft that had been transporting troops in Angola and successfully prevented the then government there from being overrun by South Africa’s army and Western-backed guerillas.