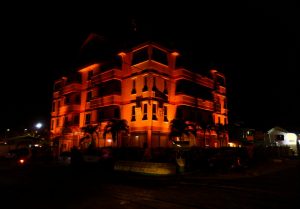 As the world observes 16 days of activism to end violence against women and children, the European Union’s (EU) mission here in Georgetown has lit up its building orange in solidarity with the movement.
While EU Ambassador to Guyana, Jernej Videtic believes judicial reform is necessary to end violence against women and children, local voices feel such reform must be complemented by behavioural shifts.
“A lot has to be done in terms of reforming the judicial system making it more effective to fight criminal acts,” Videtic told Demerara Waves Online Thursday evening. “A lot has been done already by the government. But not enough it seems because we see things are still happening.”
The ambassador expressed concern at the number of women who have died this year from acts of domestic violence or intimate partner violence saying these women must be remembered in our activism. He called for more sensitisation in the population, especially among men, on how to behave towards girls and women thus putting the sexes on more equal terms.
Red Thread Guyana, a women and child rights group, shares a similar position to the ambassador. “We have domestic violence law but there are gaps,” Red Thread member Joy Marcus told Demerara Waves Online. Marcus said the application of protection, occupation, and tenancy orders for victims of domestic violence and intimate partner violence would differ between the coast and hinterland or riverine areas.
Guyana’s established laws against domestic violence and intimate partner violence in 1996.
“Not all communities have courts,” Marcus said, adding that a person can only be held for 72 hours whereas court sessions in some communities, like Mabaruma in Region One, are held every three months.
“When you release that person on bail the next day or three days, what happens three months down the line when there is the next court day?” Marcus questioned as she pointed to Red Thread’s experience.
Police outposts in hinterland areas also presents a problem since these locations are spread out and sometimes far away. “In Lethem, the perpetrator could escape over the border to Brazil and once he or she escapes then what happens?” Marcus continued.
As part of the US State Department-funded project, Red Thread is working in five communities across Guyana. These areas are Plaisance and Better Hope on the East Coast of Demerara, in Parfaite Harmonie, Lethem, Bartica, and Anna Regina.
Red Thread is training two persons from each of the communities to recognise domestic violence and to work along with victims to navigate through the penal and judicial systems and offer moral support.
Outside of those structural issues, Marcus said there is also a need for behavioural shift especially among police officers. She said while there are police officers who have done as much as they can to assist, there are others who “push around victims.”
Marcus said although police stations profess to have a zero tolerance policy towards domestic violence and intimate partner violence, the attitudes of some officers say otherwise.
Marcus called for further training of police officers to recognise the complex issue of domestic violence especially as it relates to the victim’s confidence in reporting domestic violence to the police.
Rights Activist Sherlina Nageer shares a similar position to Marcus and Red Thread. Nageer told Demerara Waves while reform is necessary and long overdue, it is only part of the solution. “What’s needed as well is a revolution in social thought and norms around gender and the constructs of masculinity and femininity.”
Nageer, a public health advocate who grounds regularly in public spaces with passersby, said work must happen on the ground, in the streets and in the communities. where it is essential. “At the end of the day, it’s people who implement and enforce the laws and we see time and time again how person’s biases affect the application of the law in Guyana.”
Nageer and Marcus’s comments came just weeks after the United Nations Children’s Fund (UNICEF) released its 2016 situation analysis on women and children in Guyana. That report, drafted in collaboration with the Social Protection Ministry, states men in Guyana perceive themselves as having control over women’s bodies, and further that that perception of control extends to women’s offspring.
The 16 days of global activism ends on December 10. The EU mission located at Croal Street, Georgetown, will host a street fair to raise awareness of the need to end violence against women and children.
Cases of extreme violence against women continue to feature in this country’s media. Between august 2016 to November 2016, three women were shot in their mouth by men they shared an intimate relationship with. One of those cases was reported to be accidental.
Outgoing UN Secretary General, Ban Ki Moon, this year, launched the UNiTE campaign which emphasises the need for “sustainable financing for efforts to end violence against women and girls towards the fulfillment of the 2030 Agenda for Sustainable Development,” according to the UN women’s agency.
“One of the major challenges to efforts to prevent and end violence against women and girls worldwide is the substantial funding shortfall. As a result, resources for initiatives to prevent and end violence against women and girls are severely lacking,” the international agency noted on its website.
The theme for this year’s 16 days of activism to end violence against women and children is ‘Orange the World: Raise Money to End Violence against Women and Girls’.”
Guyana’s social protection ministry just recently draped trees along Camp, Main, Carmichael, and Waterloo Streets in orange fabric to raise awareness of the social scourge that is violence against women and children. The Ministry’s hotline number for reporting such violence is 231-6556.