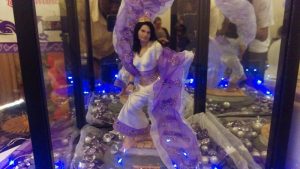 The Caribbean American Domestic Violence Awarness (CADVA) organisation has unveiled a miniature sculpture of domestic violence victim, Babita Sarjou, whose skeletal remains were found earlier this year in a shallow grave in her husband’s backyard.

Sarjou’s remains were found by police near a fence and alleyway drain at Seaforth Street Campbelville. Her reputed husband, Anand Narine, and an alleged co-accused were subsequently charged with murder. Babita was reported missing in 2010.
The sculpture was unveiled at a forum held by CADVA at the Pegasus Hotel in line with the 16 days of global activism to end violence against women and children from November 25 to December 10. The doll, sculpted by Brazilian sculptor Julianna Lepine, took one month to complete, according to CADVA’s Programme Director Dianne Madray.
Babita’s younger sister, Sunita, spoke at the forum of the sadness still felt when thinking of Babita and how she met her demise. A visibly teary Sunita said to her nephew, Babita’s son who is now ten years old, “we love you very much and we are always here for you. You are the gift from your mother and we are always here to cherish you.”
“Children are suffering in silence because we do little or nothing to help. We ignore their cries through their behaviour,” CADVA’s Guyana representative, Tiffany Jackson, said in her presentation at the forum held in a section of the Savannah Suite. “It is heartbreaking to listen to the stories of individuals who continue to suffer in silence.”
Madray called for a break in the silence of families and victims affected by domestic violence. She said a child left behind when one parent kills another is left in silence because they’ve actually lost both their parents.
CADVA’s statistics suggests some 114 women and children have been killed in Guyana from 2010 to 2014. The organisation is still compiling its statistics on 2015, but nothing as yet is available on 2016.
The programme featured child survivors of domestic violence and intimate partner violence who shared their stories of losing their parents.
“Tuesday, March 8 was a sad day for my sister and I,” one young male survivor recalled. “On that day, we lost our loving mother and kind-hearted mother (name withheld).”
His mother was murdered by his stepfather.
“My mother worked several jobs in order to maintain our home and my stepfather never worked anywhere as he was always drunk and abusive,” the young survivor recalled.
“After my mother’s death, we started living with our grandfather. My sister is still going to school, and I have to work. We find it very difficult without our mother. she never let us know the pain and anger that she was going through. I miss my mother a lot.”