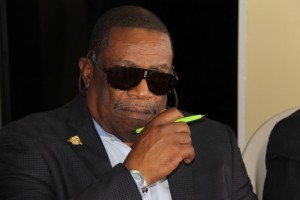 Secretary to Homestretch Development Inc; Larry London on  Tuesday declined to disclose the amount of donations that that company had received for the development of D’urban /Jubilee Park.

London, who is the Company Secretary, instead referred all questions to Public Infrastructure Minister, David Patterson although he conceded that he did not authorize him to speak on the matter.

London, who is currently Board Chairman of the Guyana Civil Aviation Authority (GCAA), said Patterson has all the information because he did not want to confuse anyone by adding his voice. “I would suggest you talk to Mr Patterson to whom we have submitted that information already,” he told Demerara Waves Online News. “If he is the spokesperson, I think you should deal with him,” said London, a former Guyana Defence Force (GDF) officer.

Patterson could not be reached immediately Tuesday. However, he told the House Monday night that he did not have all the details and that he was asked to speak on the issue by Minister of Education, Dr. Rupert Roopnaraine at short notice.

Prior to the Public Infrastructure Minister’s disclosure that Homestretch Development Inc had been initially involved in the development of the area for Guyana’s 50th Independence Anniversary Flag Raising Ceremony, no one had known of that company’s existence and role in the project.

However, when concerns had been raised about the shoddy construction of a number of the stands and what that could have meant for the safety of occupants, government quickly announced that the Ministry of Public Infrastructure was taking over the project.

While Patterson named a few companies that had contributed to the project during a debate on a People’s Progressive Party Civic (PPPC)-sponsored motion on the issue late Monday night, that opposition party on Tuesday continued to hammer government over the apparent lack of transparency.

PPP front-bencher, Gail Teixeira on Tuesday said Homestretch Development could not have started work of that magnitude on State property without a Cabinet decision and a Memorandum of Understanding, a contract or agreement. “A private entity or a private individual just does not go on State land and start developing and collecting money without a Cabinet decision…,” she told a news conference.

Former Junior Finance Minister, Juan Edghill said other lingering questions include whether Homestretch Development would be paying taxes, who was collecting monies before the company was incorporated on January 22, 2016 as works had begun in September, 2015, and what is the relationship between government and the company. The directors are London, Rupert Roopnaraine, Babita Ram, Geniton Miller and Victor Wilson. “The government set up a private company with these individuals to receive monies from private individuals, businesses and companies and individuals in the Diaspora to get that project done,” Edghill said.

Patterson Monday night told the House that government had no choice but to build another facility because the International Cricket Council had objected to the Providence Stadium being used for social events. He said the Guyana Police Force and Guyana Fire Service had warned against the use of the stadium again because President David Granger’s inauguration had attracted at least 44,000 persons at the Stadium which was built to accommodate 15,000 persons.