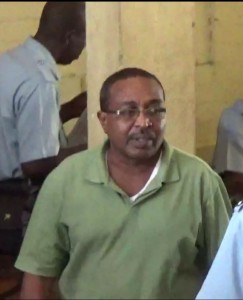 A former Guyana Police Force Sergeant, who is accused of the murder of his common-law wife, was Tuesday committed to stand trial for the indictable offence.

City Magistrate, Fabayo Azore said the prosecution proved that there was sufficient evidence for Colin Bailey to stand trial by a High Court Judge and jury for the alleged murder of  his common-law wife, Surmattie “Savita’ Ramnaress three years ago.

His defence lawyer was Nigel Hughes and the Police Prosecutor was Stephen Telford. The prosecution relied on a paper committal and the defence lawyer called three witnesses for cross-examination.

Bailey of of 63 Vryheid’s Lust, East Coast Demerara  is accused of murdering Ramnaress between August 30 and 31, 2013 at Diamond, East Bank Demerara.

Ramnaress was found lying face down in her garage. An autopsy found that the 46-year old woman was beaten to her head and other parts of her body and efforts were made to strangle her. A part of her house was burnt.

Bailey had been previously questioned about the murder, but he was exonerated until a man claimed that he was paid by the former sergeant to kill the woman.

Bailey was fired in 2015 for allegedly being involved in a corrupt transaction.