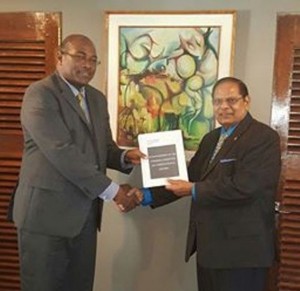 He told a news briefing at his Alliance For Change (AFC) headquarters  that he has asked for approximately GYD$80 million to be set aside in the 2017 National Budget to fund the establishment of a secretariat and the holding of countrywide consultations.

As much as 2,000 persons could be employed to forge ahead with constitutional reform that could take as much as two years.

The Prime Minister said Constitution Consultative Reform Bill would soon be tabled in the National Assembly to kick-start the process. Asked how government intended to win buy-in from the main opposition People’s Progressive Party (PPP), Nagamootoo said overtures would be made when the Bill is considered by the 65-seat law-making body. “At the time when I would have tabled the Constitutional Reform Commission Bill I would expect that there would be some consultation with the opposition in terms of the content of the bill because I would seek to have full support,” he said.

Nagamootoo said the reform of the constitution is in keeping with the AFC’s campaign promise to improve governance and “open up the door for greater consultative democracy and participation by all stakeholders including opposition parties.”

“We are on the road. It’s going to be easy. It’s going to be a very complex prolonged process but the Alliance For Change is determined that constitutional reform must be remain as its priority issue,” he said

A Constitutional Reform steering committee, headed by Attorney-at-Law Nigel Hughes, has already dispatched a report to the Prime Minister for further consideration by Cabinet.