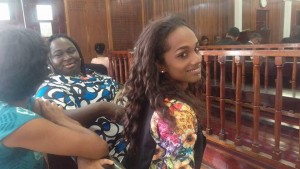 In the Court of Appeal this morning, Chancellor Carl Singh; Chief Justice Yonette Cummings-Edwards; and Justice Brassington Reynolds heard arguments from Attorneys Dr Arif Bulkan and Nigel Hughes against the uncertainty and possible arbitrary application of “improper purpose” in the penal and judicial system without a clear definition.

Cross-dressing was made illegal in Guyana by the Parliament in 1893, while Guyana was under British colonial rule. Guyana celebrated its 50th year of independence from the British this year.

Following Chang’s 2013 ruling, it was determined that the state, through the Police or the Judiciary, would determine what constitutes an “improper purpose”.

The standard of the law must contain principles of access, prospective notice, and must not leave room for arbitrary applications, according to the appellants’ attorney, Dr Arif Bulkan.

“The law itself must identify an intelligible standard [and]… the law itself must have limits or be bounded so that people can know in advance whether or not the law in question is capable of definite enforcement,” Bulkan argued.

Chancellor Singh questioned whether the judicial minds could not apply the facts of a particular case to a dictionary definition of an “improper purpose.” 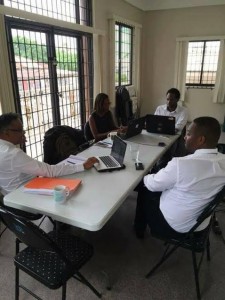 “It would be an unchallenged delegation of authority for a Judge,” Bulkan responded. He said too the offense that former Chief Justice Chang references “hinges on a mental element only” with an undefined purpose and no rigour.

The dictionary definition, Bulkan continued, is problematic because it provides no guidelines for application. “When you have a law that is vague, it allows for arbitrary application and arbitrary enforcement by Police. But in the meantime you have suffered tremendous prejudice.”

“Offences must be created by the legislation with proficient clarity,” Bulkan concluded. “That is the crux of the problem because when it is asked: would not a magistrate be able to figure it out? What we have seen is even Magistrates apply inconsistent standards of the Court.”

The state’s attorney, Kamal Ramkarran, made a case that the matter is too small to be dealt with by the court. Ramkarran is a private practice attorney representing the Attorney General in this matter.

Chancellor Singh reminded Ramkarran that the Halls of Justice remain open even for the smallest of matters.

The state argued “improper purpose” could be determined on a case by case basis. Chancellor Singh interrupted saying if this is true then, as Bulkan indicated, there is uncertainty in the law.

Ramkarran went on to argue that sex is not ambiguous and persons are either man or women from birth. He added that the “end result must be looked at” in determining how someone dresses.

“Does the person assume the persona of a man or woman?” he questioned.

Ramkarran’s statement did not sit well with observers in the Court, including representatives from the Guyana Trans United (GTU), and Society Against Sexual Orientation Discrimination (SASOD), as well as other observers.

In an effort to reduce the significance of the current case, Ramkarran noted, “I’m sure the transgender community is a very small minority but there are other offenses to be dealt with like the buggery laws.”

“Why not challenge this?” Ramkarran questioned, asserting that the buggery laws “certainly affects more people.”

Chief Justice Cummings-Edwards urged Ramkarran to stick with the case at hand, noting that if a case regarding the buggery laws were to come before the Court, it would be dealt with then.

While today was designated as the date for deliberation, the Appeal Justices will entertain a final round of submissions from both the state and the appellants. Both parties were given four weeks for final submissions.

Chancellor Singh expressed concern that the matter will go on for another two months. The appeal judges, however, collectively allowed for the submissions which would see a decision made on the case by February 2017.