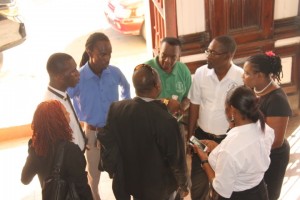 Chief Justice, Yonette Cummings-Edwards on Thursday ruled that the procedure used by the  Teachers Services Commission to promote teachers was flawed and ought not to have been used, bringing an end to a long-running dispute with the Guyana Teachers Union (GTU).

GTU President, Mark Lyte said the way was now clear for teachers who have long expected promotions based on their years of service, age and achievements would be promoted by January, 2017.

“Here it is a Judge had to correct her (TSC Chairman Leila Ramson) that what you and your commission would have done, it was not properly done so you need to re-do it now,”  GTU General Secretary,  Coretta Mc Donald told reporters after the ruling.

About one year ago, the GTU had moved to the court to challenge the legality of deciding who should be promoted based on comments by their colleagues instead of set guidelines.  Mc Donald said the GTU now plans to seek legal advice concerning those teachers who would have been eligible for promotion but had not been granted based on the procedure “due to the slothfulness and stubbornness of the Teaching Service Commission.”

Expressing satisfaction with the High Court’s decision, GTU President, Mark Lyte explained that teachers would not have to submit new applications for promotions, but the TSC would now be obliged to reconsider the existing ones. “The problem we had was that the Teaching Service Commission reacted based on the comments made by education officers, head-teachers, REdos (Regional Education Officers) and the provision of the Rule Book governing the Teaching Service Commission does not allow them to use those comments,” he said.

Lyte explained that promotions are based on points and, with this ruling, existing applications would have to be pulled and again evaluated by the same panel that includes former GTU President, Auvril Crawford. “That whole preliminary list can s ee changes because many persons were promoted when they were not eligible,” said the GTU President.

The GTU plans to recommend modifications to the application form.

The GTU General Secretary had also stated in High Court papers that the applicants had not been given an opportunity to respond to those comments and views.

The union has credited teachers, public and the media for enduring the struggle and highlighting the teachers’ plight.

2016-11-10
Denis Chabrol
Previous: GRDB boss sent on leave after he’s charged with fraud
Next: No indications of change in US visa policy after Trump win- Amb. Holloway