Lethem municipality to clamp down on illegal night spot activities 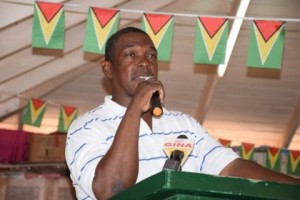 The Mayor of Lethem, Carlton Beckles has pledged to address social issues affecting the Region Nine Township. Mayor Beckles, at an outreach hosted by the Ministry of Natural Resources over the weekend, assured residents that the municipality has drafted a plan to address illegal activities.

“As it relates to prostitution and other social issues, the municipality is viewing it very seriously. I would have engaged the police officers, and we would have come up and devised a plan,” Beckles said.

Additionally, Mayor Beckles was critical of night spots that encouraged the illegal activities. “We are looking at school aged children frequenting these night spots. We will have sting operations to deal with these things, I can assure you that.”

Minister of Natural Resources, Raphael Trotman was critical of miners who encouraged illegal activities in the region, noting that there were “too many complaints” of illegal activities such as trafficking in persons, particularly in the South Rupununi.

“We are looking at that very seriously in the municipality of Lethem, and under my tenure, I’m not saying that we will achieve to the max, but I can assure you we will bring it to a minimum,” Beckles pledged to the residents.