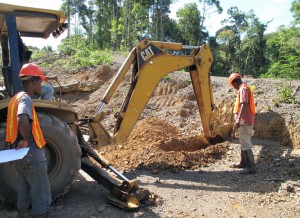 The Chinese-owned Bosai Minerals Group has agreed to buy a manganese project at Matthews Ridge, North West District from the Canada-headquartered Reunion Gold Corporation for US$10 million.

Under the deal announced by Reunion, it on November 4, 2016 agreed to sell “all of its rights, title and interest” in the project to Bosai which would begin paying 50 percent of the agreed amount when production begins.

“Under the terms of the agreement, Bosai will pay to Reunion a total amount of US$10 million of which US$5 million is payable at closing and US$5 million is to be paid at the rate of US$2.00 per tonne of manganese concentrate or ore shipped from Matthews Ridge once it enters into production,” Reunion said in a statement.

In keeping with the deal, Reunion said it agreed to transfer to Bosai the four prospecting licences (which make up the Matthews Ridge project), the March 2011 Mineral Agreement between Reunion, the Co-Operative Republic of Guyana and the Guyana Geology & Mines Commission (GGMC), and capital assets located at Matthews Ridge.

Manganese is used in the production of steel.

Reunion says it intends to continue to focus its exploration in the Guiana Shield of South America, and more specifically on early-stage gold projects.

To that effect, Reunion announced  that it had entered into a non-binding letter of intent with Union Minière de Saül (“UMS”), an arm’s length private company, pursuant to which UMS would grant to Reunion an option to acquire an 80% interest in the Haute Mana gold project in French Guiana, South America.

“Reunion would be entitled to exercise the option by completing a preliminary economic assessment on the project within a period of five years. Reunion expects to enter into a definitive option agreement with UMS over the next few weeks. The transaction will be subject to usual conditions and requisite regulatory approvals including the approval of the TSXV,” the company said.