Father charged with stealing GYD$1 million in cash and items 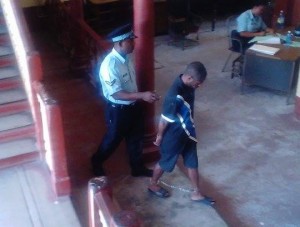 A father of seven is now on remand after appearing before Magistrate Fabayo Azore on two charges of armed robbery.

The 35-year-old initially pleaded guilty with an explanation to the first charge read, but a not guilty plea was entered for him following the explanation. He said he never committed the act since he was working in the interior, but that he is pleading guilty since he has no one to post bail for him. Magistrate Fabayo Azore then told the defendant that that was not a good enough reason for pleading guilty and entered the not guilty plea.

To the second charge, Smith told the court he’d just come out of the interior where he works when police suddenly swooped down on him saying he looked “like the guy”.

Smith continued that the “guy” in question wore a scarf, so only his eyes and nose and mouth were visible.

Prosecutor Simone Payne objected to bail due to the seriousness of the offense, and mentioned that there’s a CCTV footage of the accused. The matter will be called again on November 18, 2016