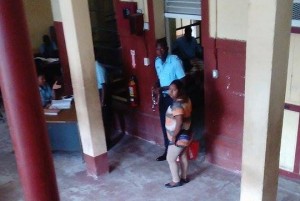 A man and a woman have been remanded after appearing before Magistrate Leron Daly for robbing another man of his car, phone and cash.

It is alleged that on October 26, 2016 at Diamond, East Bank Demerara Robert Beckles and Sharda Thomas robbed Lakeram Budurgh of one Toyota Premio motor car valued GYD$3 million, one Blu cellular phone worth GYD$15,000 and $10,000 in cash, at gunpoint.

They both pleaded not guilty to the charge when it was read to them.

According to the facts presented by Prosecutor Bharrat Mangru, on the day in question the two accused went to a taxi service and requested a cab to go into 14th St. Diamond Housing Scheme. The court heard that as they were heading to the location requested , the accused told the driver that he had passed the house. They then placed a gun to the driver’s head and relieved him of his car and the other items in question.

The driver then called other taxi drivers in the area, who gave chase to the getaway car.

As a result of the chase, the stolen car crashed and Thomas was pinned down in it and caught. Her male alleged partner in crime managed to escape but he too was eventually caught.

Mangru objected to bail because of the seriousness of the offense, and the Magistrate complied, remanding the two. They are scheduled to return to court on December 5, 2016