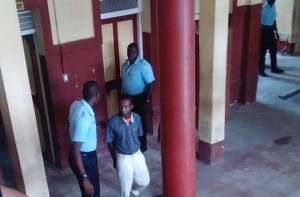 A labourer is now on remand after appearing in court on Monday on two counts of robbery under arms.

The first allegation against Ron Simmons is that on May 3, 2015 at Covent Garden, East Bank Demerara he, being in the company of others and armed with a gun, robbed Valdes Nickram of GYD$100,000 cash, four cellular phones (GYD$140,000), three wrist watches (GYD$39,000), and a quantity of jewellery valued at GYD$1 million.

Simmons, who is 31-years-old, pleaded not guilty to both charges and was remanded to prison.

He will reappear in before Magistrate Fabayo Azore on November 18, 2016.