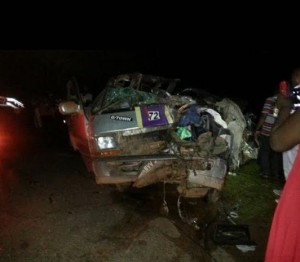 One man and one woman were killed Friday night on the Linden-Soesdyke Highway in a smash-up between a bus and a truck carrying logs , several sources confirmed

The police say they are investigating the fatal accident which occurred about 1930h. last night on Moblissa Highway which resulted in the deaths of Bridgette Alleyne 57 years, of Goed Fortuin WBD, and a so far unidentified male.
Enquiries disclosed that Motor Lorry GMM  6461 transporting logs, was proceeding in a western direction and Mini Bus BVV 3782 with three occupants inclusive of the driver who is the husband of Bridgette Alleyne, was proceeding in the said direction behind the lorry when it allegedly crashed into the rear of the lorry. As a result of the impact all of the occupants received injuries and were rushed to the Mackenzie Public Hospital where the two were pronounced DOA and the driver was treated and admitted in a stable condition.
Both drivers were given a breathalyzer test and no trace of blood alcohol was recorded. The driver of the lorry is assisting with the investigation.

An eyewitness on the scene said that a Mahdia bus was returning to Georgetown when it slammed into the truck near the Moblissa Brigde, killing the two persons on the spot. They were travelling from Takuba Lodge, Konawaruk Mining District.

“The whole (bus) top and left side ripped off and it drive into a truck park before the bridge,” he said.

Another man recalled travelling in another Mahdia bus and driving up moments after the accident occurred. There he noticed that the bus was totally written off and the three motionless bodies were inside.

He said the logs, which extended about 15 feet from the end of the truck’s tray, had no red light, red reflector or red cloth.