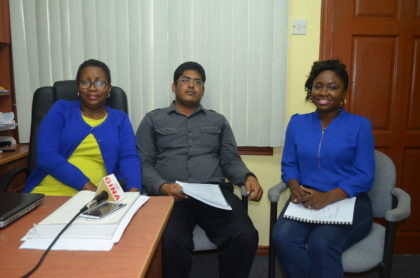 The Competition and Consumer Affairs Commission (CCAC) on Thursday said it is being flooded with numerous complaints about soured deals with auto dealers  and said those sellers are bound by the three Rs- Repair, Replace or Refund- if vehicles that they sell develop defects during the warranty period.

“The other thing is, understanding that there is something called a warranty. All vehicles that you purchase from an auto dealer or a bank, whether it’s new, used, or reconditioned, you have a maximum of six months. Every vehicle purchased, you have six months warranty on all parts and labels,” Head of the CCAC’s Consumer Affairs Unit, Haroon Khan told a poorly attended seminar on Consumer Protection in the Auto Industry.

Less than 20 persons from the invited public attended the seminar that was held at the Herdmanston Lodge, Peter Rose and Lamaha Streets, Georgetown.

Consumers and future auto consumers were told that they are entitled to either of the three Rs; Repair, Replace, or Refund once a consumer brings a defection of the vehicle purchased to their attention, within the warranty time. Consumers have the right to be satisfied by any of the three options at the hand of the dealership, as the dealers sees fit.

He said the CCAC was being inundated with a range of complaints about bad deals with auto dealers, prompting the need for the seminar that informed consumers of their rights and obligations in keeping with the 2011 Consumer Affairs Act.

The volume of the complaints, Khan said, “are a cause for concern, particularly about defective vehicles, financing and after-sale guarantees.” Consumers, he said, have also been complaining of receiving false information, being deceived through false advertising; being given insufficient information, and being forced or coerced to sign blank contracts.

The CCAC official also cautioned consumers against signing contracts that might tie them to unfair provisions when purchasing vehicles from auto dealers.

Khan said that many consumers sign these contracts without being aware of the fine printed or invisible unfair stipulations. As such, the seminar was geared at making them aware of the principles governing the Consumer Affairs Act, such as, warranties, receipts and unfair contract terms predominantly present in hire purchase or sales agreement. “We want to let consumers become aware that when they purchase a vehicle on hire purchase, whether it’s through a bank or through an auto dealership, that there are terms and conditions within that contract for that agreement that can be unfair, and they need to be aware of what those unfair contract terms are, and how to avoid signing hire purchase agreements that have unfair contract terms that put them at a detriment.

The seminar proved very informative and went in depth on advising auto consumers, particularly future consumers, on what measures they should take when planning to purchase a vehicle. The most important consideration listed was having a working budget plan. Khan advised that it is important to know what your budget is, what are the financing options available –be it loan or cash options, knowing the fair purchase price, and the expenses to be considered – such as vehicle cost, license and registration cost, gas, insurance, and sales tax. Another option to consider, the audience learned, was the depreciation of the value of the vehicle once purchased.

In concluding, Khan warned that buying a used vehicle is a risky undertaking which should not be done in a hurry. “Be careful before you get stuck with a lemon. A lemon is a vehicle (often new) that is found to have several manufacturing defects which may affect the safety, value or use of the vehicle,” he said. “Know your rights and responsibilities as a consumer and ensure you get value for your money. A wise consumer should always do their due diligence before purchasing any product,” he said.