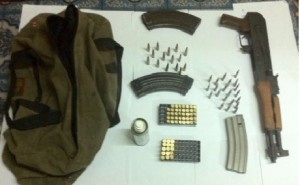 An AK-47 assault rifle and 69 rounds of a variety of ammunition have been found in a house in Linden that is owned by overseas-based Guyanese, police said.
The Guyana Police Force credited the “excellent and commendable actions of a dutiful citizen”in Linden who handed over the high-powered weapon and 15 rounds of ammunition to police.
Also handed over to lawmen were two AK-47 magazines, fifteen  .38 live rounds, thirty nine 9mm live rounds and twenty-one .223 live rounds and a magazine.
“The 42 years old citizen was engaged in the process of “house cleaning” when he saw a haversack behind a wardrobe and a closer examination discovered the firearm and ammunition, after which he rushed to the police station and informed.
Police said the house is owned by persons residing overseas and persons were renting it prior to the discovery.