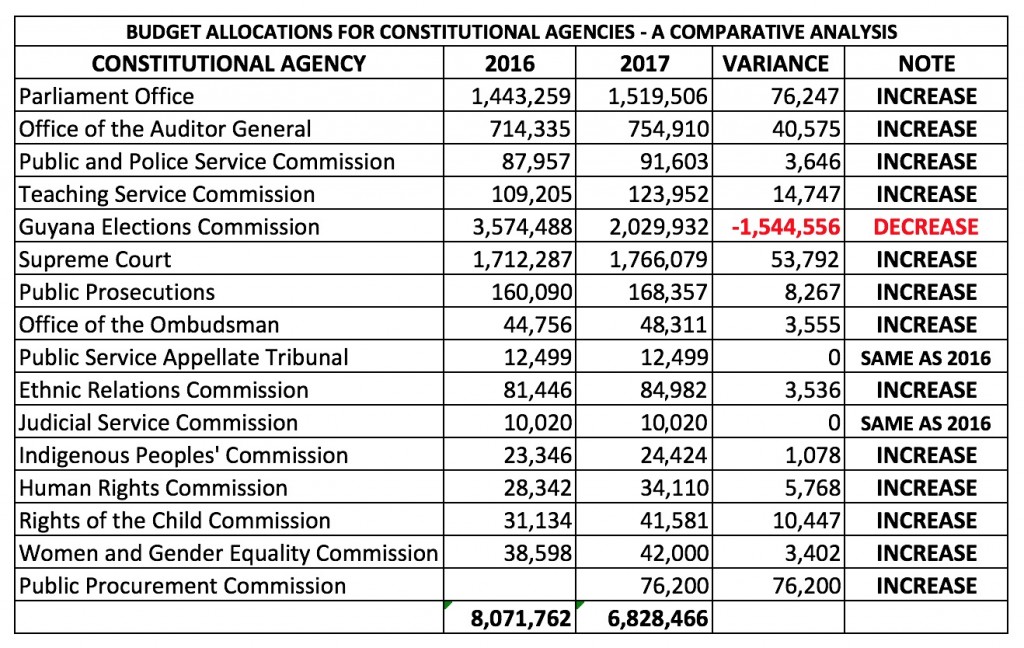 The David Granger-led administration on Wednesday heaped scorn on the opposition People’s Progressive Party Civic (PPPC) for falsely peddling that funding has been cut to all the constitutional agencies to curtail their scrutiny of government’s programmes.

“The Government of the Cooperative Republic of Guyana rejects the baseless and false propaganda of the opposition PPP that the proposed financial allocations for constitutional commissions and agencies for 2017 have been maliciously reduced from the 2016 budgeted amounts,” said government three days after the PPPC levelled such a claim.

The PPPC hopes that government will give more money to GECOM to finance house-to-house registration that is planned for next year.

In addressing the PPPC’s criticism about how the Finance Ministry arrived at an allocation of GYD$76.2 million to the Public Procurement Commission although the commissioners and the Public Accounts Committee have not met to discuss their needs, government said that amount is a provisional allocation “for the establishment of this agency.”

Stressing that the APNU+AFC-led government is recommending increases in the 2017 budget estimates for 12 of the 16 constitutional agencies, the opposition called on the  PPP “to act responsibly and to desist from willfully seeking to mislead the Guyanese public and using the constitutional agencies for political theatre.”

The coalition used the opportunity to slam the PPPC government under Presidents Bharrat Jagdeo and Donald Ramotar engaged in a “stubborn refusal” to give block amounts to bodies such as the judiciary, but that has since changed since the now more than one-year old administration was voted into office.

“The reason why the former government did not permit the independence of these agencies in keeping with the intention of the Guyana constitution, was clear and evident. The PPP government used finances as a weapon of manipulation of these bodies.

The Coalition Government is proud of its record of elevating the constitutional bodies to their status of financial autonomy, and for respecting the time-honoured principles of separation of power and the supremacy of the constitution,” the government said.