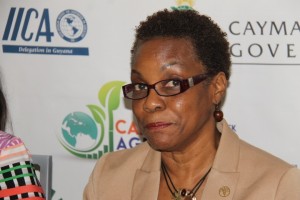 A top official of the Food and Agriculture Organisation (FAO) on Tuesday lamented the wastage of agricultural produce at Bourda Market in Guyana’s capital, Georgetown to hammer home the point that poor transportation continues to be a major problem facing the Caribbean’s agricultural sector.

“It hurts my heart to see good tropical fruit from Guyana rotting,” acting sub-regional FAO Coordinator, Lystra Fletcher-Paul told the opening of an Agricultural Trade and Transport Ceremony at the Caribbean Week of Agriculture being held in the Cayman Islands.

Programme Manager for Agriculture at the Guyana-based Caribbean Community (Caricom) Headquarters, Nisa Surujbally said the decades-old problem of transportation would be discussed by Caribbean agriculture ministers at their Council for Trade and Economic Development (COTED) meeting that is being held to coincide with CWA.

Fletcher-Paul recalled going to Bourda Market every Wednesday while she was stationed in Guyana as the FAO Representative there.

Noting that the Caribbean’s annual food import is more than US$4 billion, she questioned why some of Guyana’s produce could not be shipped to other islands with the obvious answer being inadequate transportation. She warned that if Caribbean nations continue to eat imported food, peoples across the region would continue to suffer from Non-Communicable Diseases such as hypertension, heart ailments and cancers. 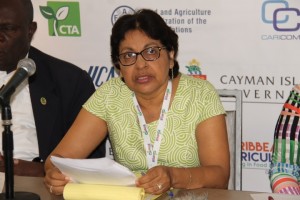 “If we continue to import all this food which is killing us we will not be in a god position in the Caribbean,” she said. Figures show that 40 percent of the Caribbean’s Gross Domestic Product (GDP) is spent on NCDs. “A lot can be addressed if we eat what we produce locally,” she said.

She said one of the major issues is that the private sector focusses on making profits, while the critical challenge is providing quality produce in the quantity and time that it is required. She said governments have to put in place food safety,  port infrastructure and legislation to make investment more attractive.

Issues related to the development and provision of a proper intra-regional transportation system, she said could include adequate food refrigeration facilities at ports, traceability to ensure that the produce is grown in conditions that are conducive to our health.

The Agricultural Trade and Transportation Seminar is expected to provide government and private sector policymakers with recommendations “in terms of the concrete actions that can be taken to change the situation.”

Surujbally said part of Caribbean’s transportation woes date back to the colonial era when the system was designed to cater for the storage and shipment of commodities such as rice, banana and sugar. “They had everything well mapped out. There was an assured market with good prices and a full infrastructure was developed…We are now where we have not given the other-crops sector the same level of institutional and infrastructural support and policy support to address the constraints and what we have is a lot of small producers and a lot of not assured markets and we don’t have the quantities to make financial sense,” she said.

Part of the solution, she said, is the creation of linkages and the involvement of service providers partly through a European Union-funded project to build a platform between suppliers and transportation providers.