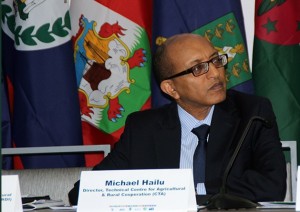 Director of the Technical Centre for Agricultural and Rural Cooperation (CTA), Michael Hailu

Director of the Technical Centre for Agricultural and Rural Cooperation (CTA), Michael Hailu says that ACP-EU organisation is moving to expand the marketing of agricultural produce and products to several other Caribbean countries.

“One of our projects, in partnership with the Caribbean Farmers Network and the Sandals Foundation, is working to strengthen linkages to domestic, regional and export markets in eight countries,” he said.

Hailu said there were “good prospects for rolling this out to Antigua, Barbados, Grenada, Jamaica, St. Lucia and St Vincent and the Grenadines.

He added that the CTA was making great strides in helping farmers to boost their earnings by marketing their produce domestically and beyond their borders.

He spoke Monday at the opening of the plenary session of the Caribbean Week of Agriculture (CWA) being held at Grand Cayman, Cayman Islands under the theme “Investment needs and strategies for Agriculture and Agribusiness.

He said CTA was working with farmers and their organisations to improve coordination in specific value chains with the greatest potentials such as roots and tubers and fruits and vegetables.

“This will enable a significant number of farmers to increase their revenues by upgrading products, processes and productivity to match market demands,” said Hailu who is here for CWA which runs from October 24 to 28 at the Westin Grand Cayman on the theme “Investing in Food & Agriculture”.

Reiterating that marketed and distributed properly, quality fresh and value-added agri-food products can be dynamic sources of jobs and income –“if only the people behind these enterprises can access the finance and business development support they need to turn them into profitable ventures.”

Aiming to increase the capabilities of small-scale producers and other players in the value chain, helping them to become better organised and profit from domestic, regional and international markets, the CTA, he said, has already made headway in forging a relationship between agro-producers and a grassroots financing entity in the Spanish-speaking Dominican Republic.

“Some of the most encouraging results of our work involves linking producers to private financial institutions, and I believe there is tremendous scope for building on this approach in the future.

In the Dominican Republic, CTA is collaborating with a private bank (BANCO ADOPEM), which has strong social roots and considers agriculture as a potential growth area–to make responsible, productive finance available to small-scale producers,” he told the plenary session,” he said.

The CTA Head also pointed out that The Netherlands-headquartered organisation has been playing a leading role in the development and use of mobile applications (apps) in its quest to leverage modern Information Communications Technology (ICT) in developing agriculture.

“Given CTA’s comparative advantage of working in the area of ICTs especially in training and supporting young ICT entrepreneurs, we promote ICTs, more specifically mobile apps to enhance various aspects of the value chain,” he said.

CWA will this week, among other things, receive presentation of several initiatives on filling gaps in value chain efficiency, and improving the prospects of all players for generating higher revenues by participating in them.