Govt to focus on preserving forests following Barama’s closure; Jagdeo warns against over emphasis on conservation 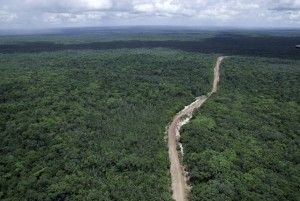 The Ministry of Natural Resources  on Thursday announced that Barama Company Limited’s (BCL) decision not to renew its Forest Concession Agreement paves the for a review of the importance of standing forests,  less than three hours after Opposition Leader Bharrat Jagdeo warned that government’s heavy emphasis on forest conservation was costing jobs.

The Ministry of Natural Resources  (MNR) confirmed that BCL has opted to close most of its operations in Guyana following the expiration of its agreement on October 15, 2016. The concession would be reallocated, government said, after it reviews the value of standing forests in absorbing greenhouse gas emissions that cause climate change.

“The MNR notes that the decision of BCL presents an opportunity to engage in a stocktaking exercise where Government can objectively assess the value of the standing forest through its contribution to the ecosystem while simultaneously examining the value of the past 25 years to the people of Guyana.

Such an exercise would be pivotal in decision-making as it relates to economic empowerment and development of sustainable livelihoods of present and future generations,” the MNR said.

Earlier Thursday, Jagdeo warned the Guyana government against moving away from the model of balanced development between sustainable development and conservation rather than focus heavily on conservation.

“They now have moved to conservation so it’s chasing away logging activities, etc promising another two million hectares to conservation.  If the new strategy is dominated by an approach to conservation the country loses out in the big scheme of things globally and our path to prosperity becomes even more difficult. More people will lose jobs here in Guyana and so it is utterly disgusting that they will farm out…,” said Jagdeo.

He said Guyana’s Low Carbon Development Strategy (LCDS) had emerged out of “tons of consultations,” eventually leading to a US$250 million forest carbon sale to Norway.

The Chinese company, Bai Shan Lin, has been already forced to close operations here after the Guyana Revenue Authority (GRA) and the Guyana Forestry Commission seized assets to recoup owed taxes and fees owed to the regulatory agency. Small loggers had cried out that Bai Shan Lin’s closure had been adversely affecting their livelihoods.

The MNR says the GFC  has been tasked to work with BCL to ensure a smooth closure of all concession related activities within the stipulated period, and to ensure that all labour and other related issues are fully addressed the holistic manner in keeping with applicable laws and regulations.

The Government says it thanks BCL for its involvement over the past 25 years, and will be engaging the company in further discussions on its stated interest in the continuation of the added value activities.