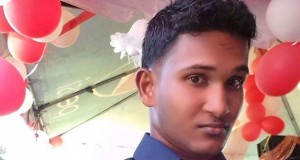 Twenty-year-old Rayon Jones was on Thursday committed to stand trial in the High Court for the murder of Timehri mechanic, Puranand ‘Andrew’ Baljit.

The murder accused, of  212 Fourth Avenue Bartica was not required to plead to the indictable charge when it was read to him in June by Magistrate Judy Latchman. The charge states that on Thursday, June 9, 2016 at Madewini, Timehri East Bank Demerara, Jones murdered Baljit during the course or furtherance of a burglary.

The defendant was represented by Attorney-at-Law Latchmie Rahamat who at the time the charge was handed down had requested that the preliminary inquiry of murder be done by paper committal to save judicial time.

Jones, a father of one, had appeared before the Bartica Magistrates Court during his teens for several matters of burglary.

On June 9, 2016, Baljit was found murdered in his bedroom at his 57 Timehri Public Road, East Bank Demerara house. Police had treated the incident as a robbery-murder. Investigators discovered the dead man with several stab wounds about his body, mainly to the chest and shoulder.

A 12-inch knife was also found on the room’s window ledge, but the police had said that that was not the weapon used to carry out the gruesome act. In addition to that, detectives had on the following day found a pink mobile phone at the murder scene.

The dead man’s father, Harichand Baljit, had told investigators that he’d heard screams emerging from his son’s room on Thursday evening. He revealed that he immediately rushed to the boy’s bedroom door but it was locked. He then decided to climb through his son’s bedroom window and discovered the young man lying in a pool of blood.

The matter will be called at the next criminal assizes sometime early next year.

Presiding was Magistrate Leron Daly. The prosecutor was Bharrat Mangru.