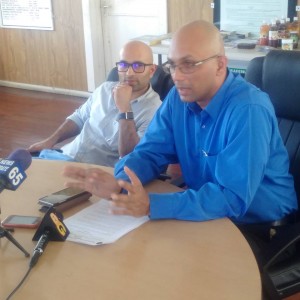 The Georgetown Chamber of Chamber of Commerce and Industry (GCCI) on Wednesday said official police crime statistics do not reflect the true situation, although latest police statistics show that there has been a 21 percent decline in serious crimes.

While crediting the police force with cracking some new and old cases, the business organisation has called for an increase in the Guyana Police Force’s manpower, further boosting of intelligence and the removal of the 16 percent Value Added Tax on security equipment.  GCCI President, Vishnu Doerga said that would allow the private sector to provide higher quality video surveillance (Closed Circuit Television) footage to police. “We are actively lobbying… for the complete removal of VAT and duty- because right now you would have to apply for a waiver on security equipment- because we do believe that with the complete waiver you walk in there is no duty, no VAT on security equipment not only does it allow you to more easily access this equipment, you can then buy better quality equipment and this would also help the public sector,” he said.

Doerga said the business organisation has been assured by the Guyana Police Force and the Ministry of Public Security that the police force’s crime statistics are drawn from stations across the country. However, he believes that some victims do not report crimes to the police, a situation that may result in inaccurate official figures.

“There is some under-reporting and it would have to be a guesstimate of what the level of under-reporting is of people, of people who feel that it might not even be worth it to report it to actually report and that is significant there might not be a reduction,” GCCI President, Vishnu Doerga told a news conference one day before security forum and exposition to be held on Friday, October 21, 2016 from 3 PM at Roraima’s Duke Lodge, Kingston, Georgetown. Expected to make presentations at the seminar and exposition are representatives of the Guyana Police Force, Guyana Defence Force and SafeWay Security.

The GCCI urged victims to report the crime and if they are worried that police disclose information or that they might face further threats that they could dispatch their reports directly to the Minister of Public Security, Khemraj Ramjattan. The Chamber President declined to specifically say whether the crime statistics are factual.

The Guyana Police Force has in recent months failing to issue press releases on even some of the more serious crimes countrywide that are otherwise brought to the media’s attention by victims, police sources or other knowledgeable persons.

GCCI Junior Vice President, Nicholas Boyer could not vouch for the accuracy of the police statistics. “We have not audited how they got their information. Right now, I can’t really give an opinion on the accuracy of their figures because m not at the station levels where the officers are taking the reports so I have to trust in the police force, I have to trust the system,” he said.

The GCCI officials said whether it is one or several crimes that have been reported by the media in contrast to the statistics, it sends a negative perception to local and foreign investors. He said almost on a daily basis, potential investors ask about the security situation.