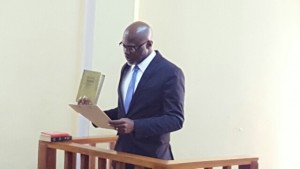 Retired Rear Admiral, Gary Best taking the oath of Commissioner to inquire into a mining death at Puruni, Region Seven.

Former Chief-of-Staff of the Guyana Defence Force (GDF) Retired Rear Admiral, Gary Best on Tuesday fended off criticisms in some quarters that only ex  high ranking military officers are being hired to conduct commissions of inquiry.

Best is the latest such hired person, having been sworn in to enquire, examine, investigate and report into all conditions and circumstances that led to the collapse of a mining pit located in or near Rock Creek, Puruni, Region Seven resulting in the death of Keon Wilson on or about October 8, 2016.

“I see no reason whether it’s an ex military or civilian conducting inquiries. I think the issue of competence and confidence and I think whoever is selected to do a Commission of Inquiry one should first determine if that person is competent enough and I think, as we look at those commissioners including ex military and civilians I think that we have always selected competent persons to conduct those Commissions of Inquiry,” he said when asked by Demerara Waves Online News.

He remarked that ex military officers are now civilians.

Other  retired military officers who have been appointed Inquiry Commissioners or investigators include Brigadier Bruce Lovell, Brigadier Edward Collins, Major General Joseph Singh, and Colonel Windee Algernon. That has triggered concerns by the opposition People’s Progressive Party Civic and other sections of the society about government’s apparent preference for ex military officers. President David Granger, himself a retired Brigadier, has already stated that they are entitled to employment.

Asked about his competency to probe the mining pit death of Wilson Rear Admiral Best acknowledged that he does not have specialised knowledge but said he would be assisted by experts.

The Commissioner is required to consider the views of stakeholders including the staff of the Guyana Geology and Mines Commission, mining operators and any other organisation or individual the Commissioner deems appropriate. Best is expected to submit a preliminary report to Minister of Natural Resources, Raphael Trotman by November 4, 2016 and the final report to President David Granger on November 18, 2016.

Deadly mining accidents continue despite the holding of several inquiries, but Rear Admiral Best hopes that his probe will play a major role in drastically reducing their frequency. “I do hope that this Commission of Inquiry will probably bring to bear all that is required to prevent the recurrence of these deaths within the mining industry.” He will consider recommendations by previous inquiries.

Attention will be paid, he said, to the Mining Act and regulations.

The probe will enquire into the actions of the Guyana Geology and Mines Commission and the mining operators as well as report it’s findings and conclusions time determine who or what was to blame for the collapse of the pit and the death of a report and to make recommendations to prevent a recurrence. The inquiry will investigate, examine and report on the regulatory, monitoring and reporting regimes that govern mining areas specifically at Rock Creek, Puruni to the adequacy and effectiveness of those agencies responsible for the oversight and implementation of these safety operating procedures, a review of responsibilities and mechanisms to realise safety operating procedures, and to determine whether there was compliance with safety operating procedures. The Commissioner is expected to make comprehensive recommendations to ensure the safety of all mining operators- the effectiveness and adequacy of the current emergency arrangements for mining related incidents or any other disaster, the interaction between departments, agencies and service providers and how these sectors can work together to better protect mining operators and reduce the possibility of recurrence of any such incident.