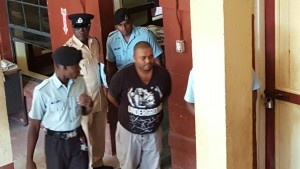 Barry Dataram at the Georgetown Magistrates’ Court on Tuesday afternoon

Convicted drug baron, Barry Dataram was Tuesday sentenced to additional imprisonment after he pleaded guilty to charges in connection with his recent escape to Suriname.

Mc Lennan sentenced Dataram to 12 months for forgery of a Guyana passport,  two years for absconding the law and 12 months for illegal departure. 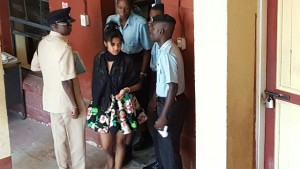 Those sentences will run consecutively with the five year jail term for being in possession of cocaine for the purpose of trafficking.

Dataram, 38  was taken to the courtroom in handcuffs and anklets.

It is alleged that between September 20 and October 15, 2016, having been charged for narco possession for the purpose of trafficking, and knowing full well that the decision on that matter was pending, they both attempted to defeat the law.
It is also alleged that between January 1 and October 15, 2016, at Camp Street, the two defendants conspired with others and with intent to defraud forged passports numbered RO341097 (Boodnarine’s) and RO376916 (Dataram’s), purporting to show that they had been stamped at the Central Immigration and Passport Office.

Finally, it is alleged that on September 20, at Spring lands Corenteyne the two departed Guyana without presenting themselves to an immigration officer.

While the female accused pleaded not guilty to the charges, when they were read by Chief Magistrate Ann McLennan, Dataram immediately stated that he was pleading guilty to all.

Boodnarine’s matter was called first and in an appeal for bail on her behalf, her attorney Clevaun Humphrey stated that the mother of two toddlers has no antecedents and poses no flight risk. He also mentioned her age to be 20 years.

In turn, Police Prosecutor Neville Jeffers objected to bail on the grounds that it is public knowledge that the female accused poses a flight risk.

This objection was acquiesced by the magistrate, who remanded Boodnarine to prison until October 21, 2016.

When it was his chance, Dataram told the court that he felt his trial was going unfairly. According to him, his then attorney Glen Hanoman and Magistrate Judy Latchman (who was presiding over the matter at the time), “were having some personal issues.” He told madam, “I don’t know if you could recall when the case first start in front of you, when my lawyer told you he wasn’t doing any matter before Court Three, and you told him to write a letter to the magistrate. But he did not write anything…I don’t know what grievances the two of them have going on.”

In relation to illegally departing Guyana, Dataram stated, “I was the one who forced this girl to leave this jurisdiction…she don’t know how to get passport and all of that…I’m the one who get all of that…” He told the magistrate that he already has five years so he doesn’t know how much more she will add to the current charges.

When asked for the facts in the matter against Dataram, Jeffers said that on Tuesday September 20, 2016 the defendant departed Guyana via the backtrack route at Springlands, and went to Suriname. Jeffers said Dataram was subsequently arrested by Surinamese authorities and was handed over to police at Springlands. The court heard that an investigation was carried out at the Central Immigration Office and it was revealed that the accused departed Guyana illegally on the said date. There was no record of him leaving the country.

In relation to the 38-year-old male defendant absconding the law, Jeffers related that the matter, concerning the accused’s having cocaine in his possession for the purpose of trafficking, was being heard at the Georgetown Magistrates Court Three. He said that during the course of the trial, the defendant absconded from said matter. The matter was subsequently heard in Dataram’s absence and he was sentenced to 60 months in prison. A wanted bulletin was later issued for the accused, after which he was subsequently arrested and handed over to police at Springlands. An investigation was carried out and the defendant was charged with the offence.

Finally, in relation to the forgery charges Jeffers said that between April 15 and October 15, 2016 the defendant conspired with other persons, and he forged a Republic of Guyana Passport numbered RO376916 in favour of himself. The court heard that Dataram did this by inserting his photograph on the biodata page of said passport, with the name David Persaud. Jeffers said that the said passport, which was indeed a forged one, was handed over to Suriname police authorities on the day of the fugitive’s arrest. Dataram was then handed over to police at Springlands, an investigation launched and he was subsequently arrested and charged with the offence.

In response to this last fact, when prompted by the magistrate, Dataram said, “Madam like I said I’m the one who get the passport, I’m the one who put the picture. I take full responsibility.”

After hearing what all parties involved in the matter had to say, the magistrate handed down her sentences to Dataram. For the illegal departure from Guyana, he was sentenced to 12 months imprisonment; for the forgery, 12 months in prison as well; and for the absconding of the law charge he was handed 2 years imprisonment.

These sentences are to be run consecutively with the 60 months previously handed down by Magistrate Judy Latchman, in relation to the narco trafficking.