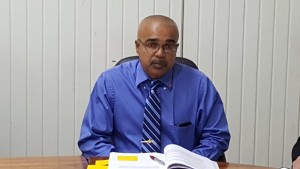 Accountant General, Jawahar Persaud told reporters that since he has been there for the past six years, the Auditor General has been consulting with the Finance Ministry’s team before publishing his report. “he would send out an initial audit report as per normal audit and we are required to respond and in that regard myself, the Deputy Finance Secretary, who is the accounting officer of the ministry, and the Finance Secretary will attend that meeting and we will have a discourse with the Auditor General where we would iron out certain misinformation or corrections to his report,” he said.

The Finance Minister said he does not want the law amended to allow for the Auditor General to mandatorily consult with the ministry’s relevant staff.

“There was a period not so long ago, when the Auditor General’s report, before it was published used to come right here at the Ministry of Finance…where it was edited for content and other things before it was published. Today, that doesn’t happen anymore,” Jordan said. He added that the Auditor General is under the Public Accounts Committee and so does not ask or show the Finance Minister anything, not even out of courtesy.  He questioned how it is that there is an extreme shift from editing at the Finance Ministry to no opportunity for an explanation especially on budgetary matters such as revenue shortfall and expenditure. He stressed the need for an “opportunity to be heard”

“I am not telling the Auditor General how to do his work. He does his work however he wants to but I would expect from an autonomous, independent institution a level of integrity, professionalism and competence when these things are being produced,” he said. 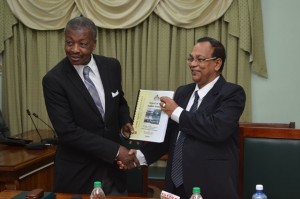 Jordan declined to say whether he believed that the Auditor General Deodat Sharma’s approach was politically motivated, but accused him of “playing to the gallery” by stating that government could not have account for hundreds of millions of dollars.  “This thing about trying to make this government look like it’s saying one side of its mouth and not doing it is totally false,” he added.

The minister, however, ruled out categorically any consideration being given to amend the law to mandate the Auditor General to consult with the Finance Minister before presenting the report to the National Assembly.

The Finance Minister noted that the Auditor General’s Report on 2015 does not take account of the fact that the current government was not in office throughout the year, the budget was passed late last year and new ministries were created.