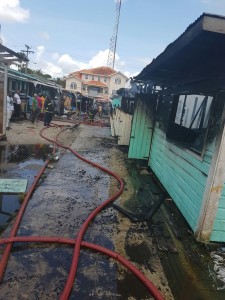 A number of the stalls that were destroyed by fire at Cool Breeze Landing entrance, Bartica.

Several stalls at Cool Breeze, Bartica were destroyed by fire Saturday morning, prompting authorities to continue efforts to regularize that area where more than two dozen stalls have been illegally erected.

Deputy Mayor Bartica, Kamal Persaud said no one was injured and there was no looting, but three stalls were destroyed by the blaze that began at about 9 AM.

Cool Breeze is a speed boat landing and shopping area at Bartica on the western bank of the Essequibo River.

Despite an apparent shortage of water, she said fire fighters prevented the blaze from catching the ceiling of the two-storey KW Shopping Mall that is located next door.  She said a total of three water tanks and the drainage pipes at the mall were destroyed.

She said if that had happened, the damage or destruction could have amounted to hundreds of millions dollars.

Persaud said the fire started in the second of the three stalls. She ruled out the fire starting in the ‘cook-shop’ and she even observed the owner of that fast-food stall removing the gas cylinder.

The Deputy Mayor confirmed hearing previously that the land on which the more than two dozen stalls are located is the subject of a court dispute. Expressing concern about the deplorable state of solid waste disposal, use of narcotics 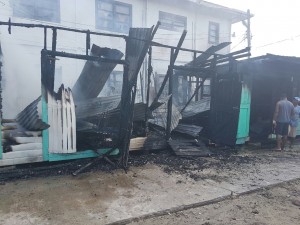 and the occurrence of other criminal activities there, she said the fire would act as an impetus for the Bartica Town Council to take some action to ensure that there is order there. The Environmental Protection Agency (EPA), she said, had visited the unregulated arcade where the garbage situation is “despicable” and some stallholders sleep.

“In the light of this the Council is going to definitely step in and have to have some serious decision-making moving forward,” she told Demerara Waves Online News. She added that the newly-elected first council of that town was hamstrung by a lack of information that inherited from the last local government body.

The Deputy Mayor added that Saturday’s blaze has shed a lot of light on the hazards that are being created.

Residents describe the Cool Breeze landing as derelict and in a state of disrepair.