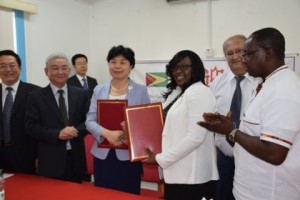 Minister within the Ministry of Public Health Dr. Karen Cummings and Vice Minister of National Health and Family Planning Commission of the People’s Republic of China exchange the signed certificates that covered the gifts that had been handed over

China on Friday handed over a number of medical supplies and equipment valued at approximately USD420,000 to Guyana’s Georgetown Public Hospital (GPHC) Incorporated.

The presentation was made by Madam Tiu Cui Li, Vice Minister of National Health and Family Planning Commission of the Peoples Republic of China.

During her remarks, the Minister encouraged the Chinese doctors working in Guyana to work together to make the family relationship between Guyana and China a longer and prosperous one. She expressed that the Chinese government wishes to provide more health and other services to the local people.

This was confirmed by Chinese Ambassador to China Zhang Limin who stated that China is ready to stand by Guyana and give support in the areas needed.

Also present at the gathering was Junior Minister of Health, Dr. Karen Cummings, who expressed gratitude for the timely gifts.

Speaking on behalf of the GPHC and the Government of Guyana, Cummings also expressed hopes that the Chinese government will continue to contribute to the development of the various sectors in Guyana, including the Health Sector. “I am very confident as we move towards the future that both countries will continue to build on the unshakable foundation and have a friendship that has been carefully cultivated and nurtured through the years,” she said.

During the formal hand-over ceremony, the Vice Minister said that she hopes to have the current medical brigade contribute to mental health care services to boost the efficiency of the services delivered in that area.

Since the first medical brigade came to Guyana in 1993, the medical practitioners had continually contributed to the improvement of medical health care across the country to where they were dispatched. The two instrumental contributions were the commissioning of the Laparoscopic Center at Linden and their work in the Ophthalmology Centre (eye clinic) at the GPHC.

The Laparoscopic Centre at the Linden Hospital Complex was commissioned in October 2014.

After the brief hand-over ceremony, the Vice Minister of the People’s Republic of China along with the Minister within the Ministry of Public Health toured the new wing of the multi-million dollar maternity ward which is expected to be commissioned before the end of the year.

The public health sector has been a significant beneficiary of medical supplies and services in the form of gifts from the Chinese Government.