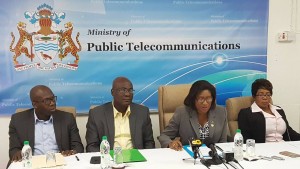 Guyana has asked the Chinese telecommunications giant, Huawei, to assess the feasibility of expanding the coastal fibre-optic network to include other areas of the country, even as it downplayed concerns that that company might be engaged in espionage.

Head of Guyana’s E-Government Unit, Floyd Levi said the assessment would determine the cost and types of technologies of expanding the US$32 million network south of Diamond, East Bank Demerara such as Bartica, Linden, Mabaruma and the Rupununi. The Memorandum of Understanding is expected to be signed in another two weeks.

Rather than resuscitate a failed fiber-optic cable link to Brazil across Guyana’s difficult and rugged interior terrain, Levi announced that government planned to link the far-flung scattered and remote hinterland communities via satellite. “At first blush, we recognise that satellite technology may have to be employed to get into particularly the remote locations so at this point in time we can say that we are actively pursuing satellite technology to get to the remote locations,” he said. Levi noted that the bandwidth requirements for those locations is “not that high. He added that the Guyana Telephone and Telegraph (GT&T) was also being included in providing dedicated IP services to some remote locations.

Government is currently awaiting Expressions of Interest from existing satellite internet providers to determine how much it would cost to provide service to the interior locations. “We also recognise that the numbers that we will be looking at could be quite huge so we expect to have an economy of scale brought to bear when pricing is considered,” he said.

Levi and the Manager of the Ministry of Public Security Citizen Security Project, Clement Henry earlier this month accompanied Minister of Public Telecommunications, Catherine Hughes  on a fact-finding mission to China where they toured several of Huawei’s headquarters, installations, factories and its university.

The E-Government system is partly aimed at decentralizing government’s services, provide telemedicine services, distance education and the submission and marking of examination materials even at the level of the Caribbean Examinations Council (CXC). “Here we are talking about establishing an interconnected digital platform that can provide government services to citizens in an efficient, cost-saving and efficient manner,” Hughes added.

The Head of the E-Government Unit said plans are also in the pipeline to build a back-up data centre at Timehri, Linden or Kuru Kuru.

Government’s announcement that it would be deepening its relationship with Huawei comes at a time when United States (US) security experts have cautioned major telecommunications companies like American Telephone and Telegraph (AT&T) against using Huawei’s services because of fears of espionage.

Levi acknowledged that  Huawei founder was a senior official of China’s People’s Liberation Army, but that company has since grown into a major global telecoms and information communications technology service provider with links to United States, Europe and Latin America. “As part of their business they have to obey a certain code of ethics when doing business around the world…and if it is deemed that Huawei is operating unscrupulously I don’t think it will help their business cause and their business model so on that note that I think that any effort to surrender surreptitiously acquire data from networks that they would have built would be against their business,” he said.

The Head of the E-Government assured that every conceivable step was being taken to protect data, largely with support from the Organisation of American States of which the United States is a major supporter. Brushing aside concerns about Huawei possibly hacking data, he added that that company is building networks in Trinidad and Tobago, Suriname, Panama, Dominican Republic, Mexico and elsewhere. The  Minister of Public Telecommunications Hughes added that Guyana has been placing great emphasis on Cyber security and Guyana has been sending officials overseas to conferences “so that we can be up to date about mechanisms that could be put in place to protect the integrity of national data.”

Hughes noted that even major developed nations have in recent years been fingered in espionage. “I would like to remind us that the nationality of those companies are certainly not limited to the Chinese. I think if we review past couple of years of global politics, it is absolutely clear that all of the major developed countries- that kind of criticism can be levelled to them also,” the minister said.

Snowden has said that Britain’s intelligence agency, GCHQ, also intercepted phone and internet communications of foreign politicians attending two G-20 meetings in London in 2009 and the The NSA tapped the mobile phone of German Chancellor Angela Merkel in October , 2013.