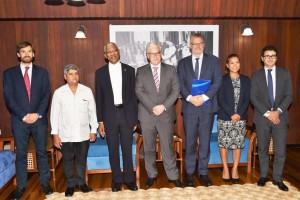 The European Investment Bank (EIB) will be conducting an appraisal of several projects in Guyana in the coming months as it seeks to return here for the first time in 16 years, possibly with the financing of a deepwater port that could be a springboard for the eventual construction of the Lethem-Georgetown road.

EIB Vice President, Pim van Ballekom noted at the end of a two-day visit during which he met with President David Granger, ministers and other officials that the “business climate in this country is welcoming” and he observed that there was “good coordination” among various government ministries in identifying priority projects.

The EIB official is optimistic of returning to Guyana next year to sign the first deal between his bank and either or both the public and private sectors. However, he said that would depend on the outcome of a due diligence process to be conducted during the next six months. “We don’t commit ourselves before we finish our due diligence process…They (EIB officials)  have to come back more often to the country in order to look more in detail on the investment opportunities,” he said, adding that Guyana “is a good deal for the bank.”

He told Demerara Waves Online News that the due diligence process would seek to determine, among other things, whether the systems here are transparent and accountable in relation to concrete investment and business plans that would be crafted for any of the projects. “It has to be an asset for the country and not a liability. It has to be a good project that adds value to the economy and that is part of the due diligence process. We have to be convinced that it is advantageous to the country,” he said.

van Ballekom said starting the rehabilitation of the harbour would be a “good thing” to accommodate larger container ships and in building out links to the construction of the Linden-Lethem Road leading to Brazil. “I was told that without a harbour, investing in a link to Brazil is not economically viable so you have to start somewhere and I think the harbour, as such, is anyhow needed due to the fact that Georgetown can receive bigger vessels for containers and I think that makes sense even without investing in the (road) link,” he said.

The EIB Vice President said the Guyana government has told him and his delegation about their interest in building the Linden-Lethem Road, rehabilitating the harbour and the construction of hydropower plants.

The EIB, he said, does not finance 100 percent of projects but would hope that Guyana’s public sector or other financial institutions like the Inter American Development Bank (IDB) to participate in funding any of those projects

He said his financial institution is not seeking to return to Guyana because of the recent discovery of a substantial oil deposit offshore Guyana or a change in government at last year’s general and regional elections. “I looked into our portfolio and I came to the conclusion that it was too long that we didn’t have any operations in this region and that was the reason to come to this country but there is no political reason behind it and as far as I know there is no reason from the Guyana part not to do business with the bank,” he van Ballekom said.

The EIB, he assured, provides loans at competitive interest rates, but that depends on whether they are guaranteed by the public sector, the level of risk involved and collateral being provided.