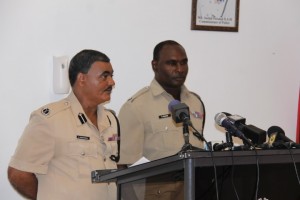 The Guyana Police Force will be clamping down on driving under the influence of alcohol and other offences during Operation Safeway, but the traffic department is not readily equipped to test drivers for marijuana use.

“From a scientific point of view, how do I know that this person is under the influence of what you speak of (marijuana), so it’s difficult to come along that line, but if reported and the person is taken to the station and certain behaviour is adduced, exhibited whatever it must call to the police there to do an investigation into it,” Police Commissioner, David Ramnarine told a news conference.

Expressing concern about the “unacceptable” and “disturbing” road carnage amounting to a 33 percent increase in fatal accidents, he said random breathalyzer tests for alcohol consumption would be conducted on motorists during the crackdown.

In terms of substance abuse, he said in 14 of the 89 fatal in which 17 persons have lost their lives he said drunk driving was established as the cause.

Marijuana use by bus drivers and conductors is becoming commonplace on a number of routes across Guyana.

The Police Commissioner made known his position hours after United States researchers announced that they have released marijuana breathalysers for use and nationwide distribution is planned for next year.

Based on existing trends dating back to 2011 and going up to 2016 so far, Ramnarine forecast that “if we don’t harness this situation that is developing,” there are likely to be 120 accidents and 132 deaths by year-end.

He announced that Operation Safeway would be launched on September 15, 2016 with the aim of “restoring much needed road safety consciousness and the purpose of which is to minimize all accidents.”  The crackdown would include increased day and nighttime patrols, random breathalyzer testing, and  increased use of radar guns. At the same time, he reiterated that only if traffic police see an offence committed they should stop drivers.

Of the number of the fatal accidents, 70 percent or 63 of the drivers’ ages ranged between 18 and 33 years old. “Very young people! Is it wildness, is it stupidity?”, Ramnarine queried.

“All of us must be concerned. We have to be concerned. We cannot sit and allow this to happen. We are a small developing country with a small population and we must not accept this,” he said

Giving a breakdown of 96 road deaths up to September 14, 2016, the Police Commissioner said 29 pedestrians, 19 motorcyclists, 11 pedal cyclists, nine passengers or occupants and 14 drivers. Sixty-three fatal accidents involved the use of private motor vehicles compared to minibuses and hire cars and minibuses.