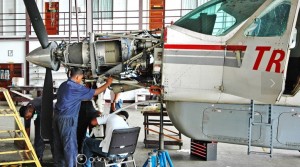 Aviation Technicians at work at the Caribbean Aviation Maintenance Services, a member of the Correia Group of Companies. (CAMS website photo).

Peeved at the paltry overtime being paid and other poor working conditions, aircraft maintenance personnel at Caribbean Aviation Maintenance Systems (CAMS) on Tuesday downed tools for one day to send a signal to management.

Christopher “Kit” Nascimento, spokesman for the Correia Group of Companies, which includes CAMS, told Demerara Waves Online News that there was no strike or industrial unrest but there was a sick-out at a time when the Human Resources Manager is in the midst of discussing with staff their employment conditions.

“There were discussions across a range of employment conditions and obviously there was a disagreement and obviously some of the staff decided to stage a sick out,” Nascimento said.

He confirmed that about 20 aircraft maintenance technicians called in sick on Tuesday. They returned to work on Wednesday. He said the operations of Trans Guyana Aviation (TGA) were not affected by the sick-out. Nascimento could not say whether the issues have been resolved because the discussions are continuing.

He refused to go into details about the nature of the grievances, but said they included salaries and overtime.

Sources told Demerara Waves Online News that the estimated 20 technicians took industrial action because all they are being given is GYD$1,000 extra even if they work one or several hours past the eight hour shift.

Asked whether there has been a higher than usual number of resignations from CAMS in recent times, he said “a number of employees have been hired by other operators. The other operators are setting up their own maintenance operations.”

The spokesman did not want to say outright whether that was due to low wages, but remarked that “the average employee goes to the highest bidder.”