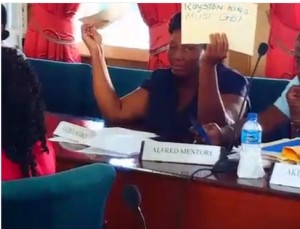 Deputy Mayor, Sherod Duncan and fellow Georgetown City Councillor Andriea Marks on Tuesday signalled that they would team up with each other to spearhead a campaign for the removal of Town Clerk, Rosyton King.

Marks’ first salvo was the hoisting of two two placards during the City Council’s statutory meeting to vent her frustration at the way King is managing the city especially the sudden removal of vendors most of whom  are APNU+AFC coalition supporters.

“Royston King Must Go,” read the placards that were held up by Marks, a vendor-rights advocate.

“I feel that Royston King is getting disrespectful to the Council. We all were voted there by people and to represent the citizens of this country,” she said. She said that many persons opted to vend during the past 23 years under the People’s Progressive Party Civic (PPPC) because there were no jobs and now they are being treated unfairly.

“I don’t have a problem that they want to clean up the City. I’m a hundred percent behind it but it is the way how Royston King is doing it. Give the people a day’s notice,” she told Demerara Waves Online News.

Already, City Mayor Patricia Chase-Green let her position known with regards to calls for King to be ousted from the appointed rather than elected office which ultimately comes under political control of the Minister responsible for Local Government, Ronald Bulkan.

The Deputy Mayor said he was contemplating moving a no-confidence motion against King over his apparent poor management of the council.

Duncan, who is from the Alliance For Change (AFC),  told Demerara Waves Online News that he would likely hold talks with A Partnership for National Unity’s (APNU) Marks to co-sponsor the motion. 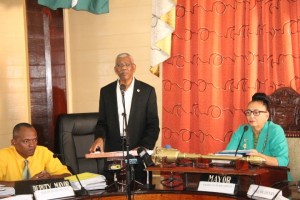 The Deputy Mayor said he would likely table a motion to that effect as early as the next Statutory Meeting scheduled to be held before month-end. “I have lost confidence in our Town Clerk and I am contemplating bringing a motion of no-confidence maybe at the next statutory,” he said.

He noted that at the weekend President David Granger described the removal of vendors from Robb Street between Alexander and Bourda Streets as “reckless.”  Duncan is also still upset about the removal of vendors from the Stabroek Market square, the secret negotiation of the parking meter agreement, the imposition of the container tax and a number of incomplete multi-million dollar projects. “Everything that this Town Clerk is involved in, I cannot point to any success,” said the Deputy Mayor. He recalled that it was President Granger who had told the City Council that there must be consultation in the local government body.

Cracks recently emerged in the APNU+AFC ranks around the City Council Chamber’s horse-shoe table over the process and lack of transparency about a parking meter agreement between the City administration and Smart City Solutions. Amid widespread public discontent, Central government later intervened by analysing the contract and making several recommendations. Council is yet to reach agreement on the recently amended agreement which can be read by councillors only if they visit the Town Clerk or Mayor’s office.

President Granger also recently met with the Mayor, a number of Councillors and representatives of the private sector  to find a mechanism to determine new revenue generation measures.