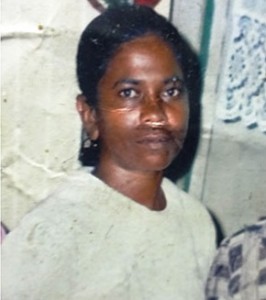 Police late Monday night said a man has confessed to the beating and stabbing to death of a woman at their Cummings Lodge, East Coast Demerara residence and they are hunting another suspect.

“A suspect has confessed to the crime and has given vital information of an accomplice, who investigators are making diligent efforts to apprehend,” police said in a statement.

Imtiaz Khan, 27, found the battered and stabbed body of his mother, 48-year old Anita Mohan in the kitchen Sunday afternoon on his arrival from work.

Police did not  release the identity the detainee, but Khan late Monday night told Demerara Waves Online that his cousin was the prime suspect. He said apparently, they had an altercation over GYD$50,000 he had owed her for posting bail after he had beat his girlfriend, ran her with a cutlass and threatened to kill her.

The Guyana Police Force said homicide detectives assigned to investigate “the brutal murder” of Mohan “are already in the process of seeking legal advice in the matter.”

Initially, the cousin had told Khan that he had left home at about 3PM Sunday to tend to cattle.

Mohan was also an itinerant vendor.