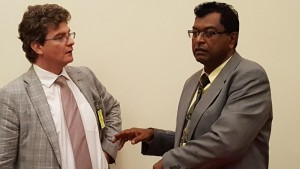 Britain’s High Commissioner to Guyana, Gregg Quinn (left) and Minister of Public Security, Khemraj Ramjattan speaking recently at the American Embassy before the launch of the US-funded Justice Education project.

Britain has slashed the amount of money it will provide to a revised Security Sector Reform Programme  (SSRP) to Guyana because London’s priority has shifted from security to infrastructure, seven years after it scrapped the original £3 million (US$4.9 million) project due to unresolved concerns by the then People’s Progressive Party Civic-led administration.

Britain’s High Commissioner to Guyana, Greg Quinn told Demerara Waves Online News that the new source of funding would be the United Kingdom’s Foreign and Commonwealth Office instead of the Department for International Development (DfID) whose focus is now on physical infrastructural projects across the Caribbean in a £53 million tranche. “It’s all British government funding, it’s just a different pot,” he quipped.

“DfID has moved a focus on to infrastructure so there won’t be a four million pound Security Sector Reform Project and there will be a variety of projects which will form part of the broader project, but we haven’t even cost it out completely what a full project might actually look like,” he said. Asked how much he thought the final amount might be, Quinn remarked that “it is not going to be an insignificant amount of money” but he couldn’t give a figure.

Quinn said a number of security sector reform activities would be rolled out in the next 12 to 24 months after discussions are fine-tuned with the Guyana government. He declined to immediately provide details about those activities, but pointed out that they would not be same because the SSRP has been modified six years on and now other donors would contribute to the package. “We will provide assistance to some of them, not all of them but other donors will come on board and do activities which are complementary that will actually indirectly which were flagged,” he said.

The top British envoy cited the US$946,000 Justice Education project that is being funded by the United States as one example in which a donor is addressing an area of concern that has been raised in several reports on Guyana’s security sector.

Asked what has caused DfID’s shift from security to infrastructure, the British High Commissioner would only say that that external  aid agency has emerged into a different organisation in recent years that would be focusing on the Caribbean rather than individual countries. “It was a central sort of DfID move. “If you think of about DfID today, it is a different organisation from 2007 and they decided that in the Caribbean region…the major focus should be on infrastructure-the roads and the bridges- and they moved away from security sector,” he said.

Following Guyana’s President David Granger’s request for the SSRP to be revived,  Minister of Public Security, Khemraj Ramjattan told Demerara Waves Online News that a Britain-based consultancy firm, Diligent World, has conducted a major assessment of  his country’s security sector needs and the priority areas for the police force, prison service and other law enforcement agencies. “Some very comprehensive questions they asked of us so that project is on stream and the consultancy, Diligent World, is working on it,” he said.

Ramjattan said rather than training, assistance would be provided in areas such as strategic management of divisions and the provision of assets. Meanwhile, the minister said China is about to provide a large number of vehicles and other assets for the police force.

The then Bharrat Jagdeo administration had objected to the SSRP, saying that Britain’s requirements would have resulted in the violation of Guyana’s sovereignty. In turn, Britain abandoned the project and said that its taxpayers had a right to say how their money should be spent. Concerns had been also raised about Britain’s Special Forces’ desire then to hold live firing exercises in western Guyana near an Amerindian village.