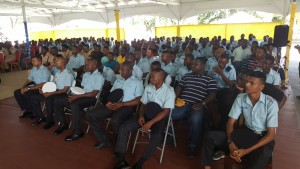 Members of the Traffic and Anti-Crime Patrols listening to an address by Police Commissioner, David Ramnarine.

Police Commissioner (acting), David Ramnarine on Saturday threatened to expel traffic and anti-crime patrol members from the force who solicit money from the public or stop civilians even if no offence has been committed.

“There are certain matters once you are charged criminally or departmentally or what we are not going to waste taxpayers’ money to interdict you and put you on half pay, comrades; we are not going to do that. Once you fall within a certain year period service out you go because that is where we have to start and one of the best ways,” he told members of the Traffic and Anti-Crime patrols at a meeting held at the Police Officers’ Mess, Eve Leary.

Ramnarine reiterated that all police road blocks must be conducted in close proximity to police stations or should be done by uniformed ranks in clearly marked police vehicles, anti-crime patrols must cease stopping vehicles and asking for documents, and police traffic ranks should not stop a vehicle unless they have observed that an offence has been committed. “No more routine stops for traffic.”

He noted that already 28 members of the police force have “gone on the way side,” a signal that they have been 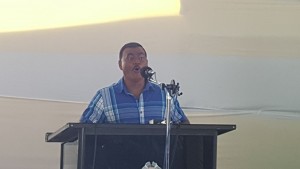 thrown out of the force for various offences. Only recently, he said policemen in Linden were implicated in the theft of several cellular phones from the Guyana Telephone and Telegraph Company (GTT) while probing a break and enter and larceny, a policeman who was on “fixed point” duty near the Georgetown Prison shot and killed an unarmed misbehaving man with a high-powered weapon, trainees stealing their colleagues’ cellular phones at the training school and the Police Commissioner’s complex, one constable chopped another one with a cutlass that he should not have had in his possession in the first place, positive drug tests in three policemen, the fleecing of miners of raw gold and recent causing death by dangerous driving of a minibus.  Ramnarine said only Friday night, two policemen in ‘B’ Division discharged rounds at an unarmed suspect during a scuffle.

Ramnarine castigated policemen and women on duty for behaving “like bandits” resulting in obstacles between the law enforcement agency and communities. He expressed grave concern about members of the Guyana Police Force stopping civilians and soliciting monies to supplement their meager salaries of GYD$60,000 (approx US$300) in an effort to satisfy their lifestyle including multiple relationships, partying five times per month, expensive cellular phones and throwing box- hands. He said supervisors were acting in collusion to enrich themselves.

“Our role is to serve but not serve at a price (‘man ah gun do dis ting but yuh know so-so-so’)…not at a price. It is becoming ridiculous, very widespread among you the junior ranks. You are one of the elements of our daily interface with the public- anti-crime patrol ranks and traffic ranks. It’s becoming a problem. You are demanding from people. You are shamelessly asking them to leave something. (‘Man de place hot. We deh on patrol hay man. Gee we something nuh. Lef something. De baies want buy something’). You have no pride and dignity in the way you do things. You have no pride and shame. You believe this uniform is given to you to enrich yourself,” he said.

Government has already ruled out hefty increases in police salaries because the Treasury could not afford it.

The time has come, he said, for the Guyana Police Force’s members to end “service with a price” in which civilians are harassed and molested for a “raise” or a “small piece”. “You can smile as much as you want, it is not going to be condoned,” Ramnarine said. 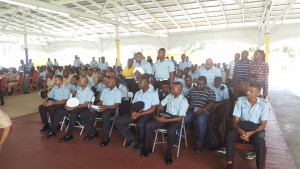 The few members of the police force, who stood up, to indicate that they were taking notes during the Police Commissioner, David Ramnarine’s address.

In an apparent effort to publicly demonstrate that many of the policemen and women have not been applying their training to the extent that they did not walk with a notepad and pen to take notes at the meeting, he asked those who were taking notes to stand. Less than half of the more than 100 attendees stood up. “Just imagine a typical example: you are coming to be addressed by an acting Commissioner and you have come here like you are prepared for a party,” he reacted. “You come here to hear and probably just to pass it through the other ear.”

The Police Commissioner said although the quality of recruit has improved, there are issues such as functional literacy that would most likely prompt the police force to again extend the duration of training four to eight months. “We need to return to the full package of seven or eight months and the time is coming for that. Worse is likely to happen in a four month programme.”