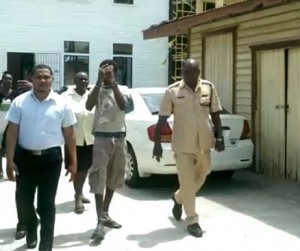 Robbery accused, Shemroy Hackett leaving the Vigilance Magistrates’ Court after he was arraigned for several robbery and related offences.

A man, who police labeled a “serial bandit” and gang member, was Thursday arraigned for 10 robbery and robbery-related offences that he allegedly committed in two months.

Hackett of Bare Root, East Coast Demerara was remanded to prison. Police Proecutor, Sherlock King opposed bail because the accused would continue to commit more offences if he is granted his pretrial liberty.

In the incident allegedly committed on the grocer on August 29, 2016 police said Hackett, being armed with a shotgun, robbed Hamid Ameer Ramlagan if GYD$3 million, one .32 Taurus pistol valued GYD$180,000, 15 rounds of .32 ammunition valued GYD$3,000, a quantity of gold jewellery and  Digital Video Recording (DVR) system. Police further alleged that on the same day, the accused was in possession of one 9MM pistol and 12 matching rounds without being the holder of a firearm license.

Hackett pleaded not guilty to allegedly being in possession of a pistol and matching rounds.