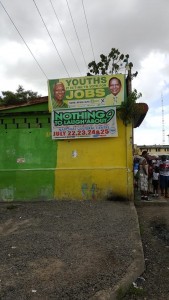 An APNU+AFC campaign promise still stands out among the hustle and bustle of the Stabroek Market Square.

One year on after an election campaign promise to create thousands of jobs, President David Granger said it is not government’s responsibility to do so.

“There is no magic wand. The government cannot provide jobs in the government service, in the police force or the defence force,” he said on this week’s edition of ‘Public Interest.’

Noting that it is difficult for the more than 4,000 youths, who drop out of school annually to find jobs, Granger stressed that ways have to be found to ensure that children qualify themselves at school to prepare for the job market. “Once they qualify it will be easier for them to move into fields which I think could lead to self employment.”

“Employment is not something to be provided by the government. There is self-employment and we are working with the villages to generate more employment in those villages but it is going to be agro-based employment,” he added.

The 2015 general elections campaign manifesto states: “The aim of your new government is to create jobs, jobs and more jobs in the shortest time possible. Our young people cannot wait “five more years” for jobs for which they could be adequately trained and could get better pay and greater job satisfaction.”

The President observed that in most rural communities there are opportunities for agro-production of pepper sauce, jam, cassava and plantain chips. “These are commodities which could be sold in our own restaurants. “Job creation does not necessarily depend exclusively on the government but educated people- people who have been trained in management, have been trained in other fields, economics, in business administration at the university- could create jobs for themselves and that is the future of Guyana,” he said.

On the matter of the unavailability of concession and capital and credit to get into large scale farming and agro-processing, President Granger said there are Guyanese who could invest their capital.

Finance Minister, Winston Jordan added that it is merely government’s responsibility to create the environment for the private sector to create permanent rather than short-term jobs mainly in the agricultural sector. “To create permanent jobs, we have to look at the sectors, we have to have an agricultural that is more diversified not sugar and just rice. It has to be far more diversified in terms of the crops that we plant and then what we do after we plant those crops in terms of adding the second and third and fourth stages of production,” he said.

Asked whether government would be providing seed financing for large scale agricultural production, he said “perhaps got to wait until the oil starts flowing.”  The American oil giant, Exxon-Mobil, hopes to begin commercial oil production by 2021.

Jordan, however, said government would be providing seed financing for youths to explore their ideas to the point of becoming a business.

Other key ingredients for job creation, he said, include the need to create a stable political environment and reduce reliance on primary products like sugar, rice and bauxite.

The Finance Minister said Guyana needed to build the foundation to create stable and higher quality jobs. While he declined to put a time frame, he said it would require a lot of work including government’s direct financing and expansion to the intermediate savannas. “It’s a lot and it calls for a lot of money.

The APNU+AFC manifesto notes that young people demand jobs and that there will be employment opportunities in science, technology, engineering, mining, agro-processing and the arts to provide jobs and promote economic growth.

The coalition has also promised to establish adequate computer labs and information technology and training in every school. APNU+AFC will create vocational and business schools which will directly reduce the unemployment rate,especially among youth.

The most effective way of alleviating poverty, according to APNU+AFC, is rapid growth alongside the provision of jobs at a living wage and creating opportunities for self-employment (land reform, credit and financing, market research, equipment, technology and business skills). The objective is an integrated employment strategy.

The coalition also stated that there would be the designing and implementing a self-employment training component of the employment and growth strategy to prepare persons for self-employment in modern services, including services for Information Communications Technology and Small and Medium Enterprises, software development, business processes and medical records transcription.