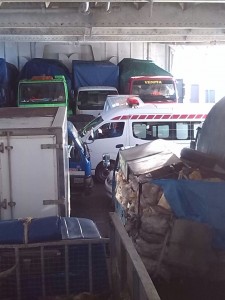 The ambulance, with an injured person, among several other vehicles aboard the grounded MV Makouria

Hundreds of passengers travelling from Supenaam and Wakenaam to Parika were Thursday morning stranded after the ferry vessel, MV Makouria, ran aground.

Among the vehicles aboard is an ambulance with a patient who was injured in a motorcycle accident.

The MV Makouria ran aground shortly after 6 AM. Based on predictions the vessel could be there for more than hour until the tide rises and there is sufficient water to lift it off the area.

Sources said that although the captain might have been aware of the very low tide combined with the laden weight of the vessel as a result of the numerous vehicles, he might have decided to continue the journey due to the presence of the ambulance with a patient aboard.

This incident occurred days after the MV Sabanto was badly damaged after it slammed into the Supenaam Stelling and was taken out of operation.