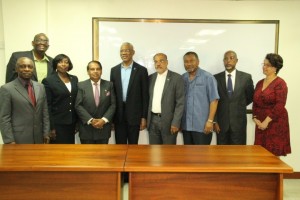 President David Granger on Monday assured that recently appointed ambassadors have not been selected based on political patronage or partisan expectations.

Addressing the closing session of an orientation session for the foreign envoys before they take up their appointments in major capitals around the world, he said the appointment of ambassadors is one for hard work instead of political affiliation. “It is not an appointment for party supporters and I would like to feel that our appointments have been based on merit,” Granger said.

In apparent reference to the period October, 1992- May, 2015 when the People’s Progressive Party Civic (PPPC) ruled Guyana, he said the concept of “merit” was difficult for some persons to understand “because they feel that there should be some patronage, some reward system but it can’t work in foreign service and I think we have nearly quarter century of evidence that political patronage is not the sound basis for the appointment of our highest representatives overseas.”

The Guyanese leader also announced that there would soon be a Department of the Environment of the Ministry of the Presidency, but he again ruled out the possibility of increasing the number of ministries. In recent times, there have been calls for the 15 ministries to be increased by two to include Tourism and Labour. “I feel that we are capable of leading this country forward with a muscular cabinet,” he said.

Granger reiterated that steps were being taken to “professionalise” Guyana’s foreign service by restoring the processes of which officers could be exposed to a variety of appointments and be allowed to understudy their seniors overseas. “The foreign service is not a place for party patronage. It is a place for hard work and it is a place for professionalism,” said Granger who has pursued post-graduate studies in International Relations at the University of the West Indies (UWI).

He told the diplomats that their decisions would be guided by the Ministry of Foreign Affairs rather than by their own personal expectations or hunches so that they effectively represent Guyana’s national interest in the areas of economic diplomacy, security, sovereignty and social cohesion.

The orientation session was held for those who have not had any diplomatic appointments before or members of staff of the Ministry of Foreign Affairs before.