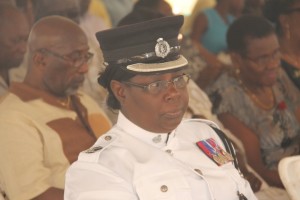 The International Women Police Association will be awarding a member of the Guyana Police Force for her outstanding work among women and the social crime prevention programme.

Senior Superintendent, Maxine Graham will be receiving the award during the International Women Police Conference to be held from October 9 to 13 in Barcelona, Spain.  Twenty  Guyanese policewomen would also be participating in that conference.

Graham was picked from among 40 entrants in 36 countries based on her academic and professional profile including her work in the Guyana Police Force.

Reacting to the decision by the International Police Association to honour her, Graham said she was “overjoyed” on learning that she would be awarded for the hard work that she and her team have been doing among policewomen and in the community in all police divisions.

“What the international body is saying is that coming to a conference for the first time, a Third World country like Guyana, for me to take twenty-three women to London, they knew it had to be a challenge,” she said in reference to the Guyana Police Force’s first participation in such a conference in the United Kingdom.

The Community Liaison Officer said the International Women Police Conference provides training in motivation, leadership, trafficking in persons and “other areas that will be beneficial in the area of work here.”