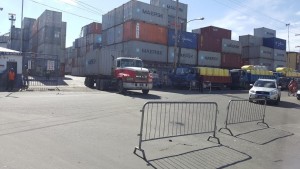 City Police erected barricades outside Muneshwer’s Wharf , Water Street to prevent laden shipping containers from leaving or entering the wharf unless a levy of GYD$25,000 is paid.

Less than one week after a City Magistrate threw out several charges against businesspersons for failure to pay a GYD$25,000 shipping container tax,  City Hall on Tuesday blocked shipping containers from leaving city wharves unless they pay the same amount of  money to use the roads.

Assistant Town Clerk, Sherry Jerrick told reporters outside Muneshwer’s Wharf that the Mayor and City Council was invoking 273 and 274 of its by-law “with respect to the use of its roads by vehicles of a certain weight.” “The container is of a specific weight and it’s not just about parking or landing of the container but it’s actually the container traversing the roadway,” she said when asked by Demerara Waves Online News.

However, companies operating at least two city wharves expressed concern that they were not notified in advance and instead were merely pounced upon by City Police and administrative officials of the City’s municipality.

“There is a barricade outside our compound, we can’t move. Nobody told us anything. They just came, they put the barricades and no traffic is allowed out,” said Robin Muneshwer, a Manager of Muneshwer’s Shipping.

Attorney-at-Law,  Robert Hanoman said the law that City Hall is seeking to enforce is “uncertain, vague and can never be enforced in a court of law” and so the Council should not permit containers to leave and enter the wharf. He said the Guyana Shipping Association would 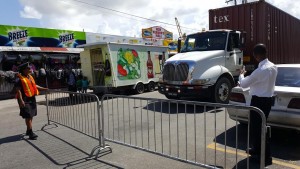 be advised to take legal action against City Hall.

Similarly, top officials of John Fernandes Limited (JFL) told reporters that they were caught by surprise when City Police erected barriers near the upper Robb Street entrance to their wharf. Pending legal advice,   JFL’s Terminal Operations Manager said his company was preparing to pay lump-sum for 30 laden containers so that they could be moved off the wharf.

“We are basically stuck as to what we should or should not do,” he said.

JFL officials said they expect consignees to reimburse the monies that the company would have paid to City Hall. That company has also said it would be seeking legal action.

Fernandes said City Hall was attempting to “strong-hand us.” “They say they have legal authority over the road… The best way is to work with the private sector and decide how they can get revenue,” he said.

Tuesday’s move to levy GYD$25,000 on each container leaving City wharves came less than one week after a City Magistrate discharged at least four cases after lawyers for those accused of failing to pay the container tax said the law under which their  clients were charged was not applicable because it referred to the discharge of goods and livestock from vessels moored alongside market stellings.