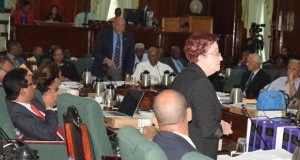 FLASH BACK: Both Raphael Trotman and Gail Teixeira were on their feet defending their cases (Roodi Balgobin Photo)

Speaker of the National Assembly, Dr Barton Scotland, on Monday threw out a motion submitted by opposition Chief Whip Gail Teixeira, to have Prime Minister Moses Nagamootoo and Natural Resources Minister, Raphael Trotman committed to the Parliament’s Committee of Privileges over ‘misleading statements’ made to the House.

Teixeira in April last had written to the Speaker of the National Assembly, to lodge a complaint against the two senior government functionaries

Dr Scotland has since determined that that there was insufficient evidence to commit either of the men to the Committee for breach of privileges.

The PPP Chief Whip lodged the complaint against Trotman, who during his budget speech earlier this year said when the A Partnership for National Unity, Alliance for Change (APNU+AFC) coalition assumed Office it had found that 100 per cent of Guyana’s productive forests had been farmed out–a notion later repeated by Prime Minister Nagamootoo.

Teixeira had called on the Speaker to have Trotman and Nagamootoo withdraw their statements and apologise. 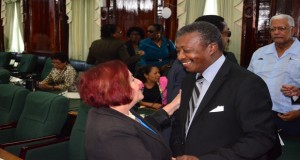 Both men refused leading Teixeira to move the motion to have the men committed to the Privileges Committee.

Dr Scotland told the House that having received Teixeira’s letter of complaint and accompanying motion, he assumed responsibility in the determination of whether a case had been made out against the two men.

According to Dr Scotland, “I hold the test as to whether there exists a prima facie case…I have examined the letter and other relevant documents and have concluded that a prima facie case has not been made and the request (by Teixeira) disallowed.”

Trotman in February last said, “we (APNU+AFC) were met with an alarming situation where we discovered that 100% or all of our productive forest was allocated by the past Government,” an assertion repeatedly challenged by the opposition.