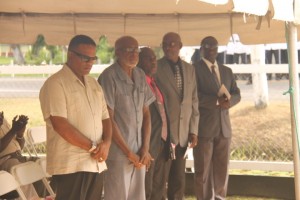 Administrators of the Fallen Heroes Foundation

Even as the Guyana Police Force’s Fallen Heroes Foundation continues to amass funds for the surviving family members of policemen and women who have been killed in the line of duty, Public Security Minister, Khemraj Ramjattan on Sunday called on the business community to put more cash in the initiative.

“This is a larger call from beyond here to the business community and to members of the society generally that, yes, you ought to come forward to help and support so that the comfort levels of the families of the deceased are going to be comforted,” he said. 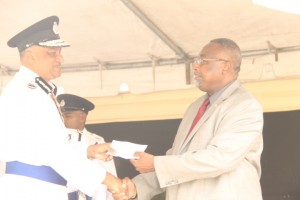 Police Commissioner, Seelall Persaud, whose initiative it was to set up the Foundation, announced that a total of GYD$2.7 million was garnered from fund raising activities from each divisional commander. That money was presented to the Chairman of the Foundation, Pastor Raphael Massiah.

That is apart from contributions from the Guyana government including President David Granger and the Ministers of Public Security and Social Services and members of the business community.

Persaud, meanwhile, floated the idea of having a National Day for fallen members of the Guyana Police Force.

The Public Security Minister pledged the Guyana government’s continued support to the Foundation and praised the Police Commissioner for the conception and implementation of the Foundation idea.