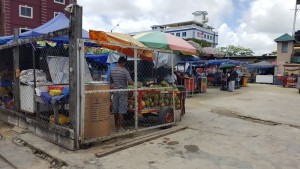 Vendors on the plot of land on Hadfield and Lombard Streets, Georgetown.

City Mayor, Patricia Chase-Green on Sunday said the Mayor and City Councillors were still searching for space to place vendors who are temporarily plying their trade on a plot of land at the corner of Hadfield and Lombard Streets.

Chase-Green’s position contrasts with what sources said was active consideration that was being given by Sugrim to grant an extension for the more than 120 vendors to remain on the land up to December, 2016.

“We still have a deadline of August to meet so we are looking at other options where we can put them but we are still negotiating with every other businessman or business place,” she told Demerara Waves Online News.

Contrary to earlier reports, Hareshnarine Sugrim said he is not Paul Daby’s power-of-attorney and that Daby does not own the land. Checks at the Deeds Registry last weekend show that there is a pending sale transaction on file, but might have been either altogether abandoned or awaiting compliance.

The Mayor said the Council was not negotiating with Sugrim because he has already maintained that he would like the vendors to vacate the land. “We have got to look at a very large area. Up to this point in time we have not been able to bend Mr. Sugrim’s back. He is not bending so far so we are looking at other alternatives,” she said.

She confirmed that City Hall had been considering acquiring the former Guyana National Cooperative Bank building at Water and Cornhill Streets, but authorities later learned that a private businessman has bought that property.

Sugrim has already ruled out any extension beyond early August 4, 2016.

Town Clerk, Royston King has told Councillors that it is their task to find alternative areas for the vendors before the deadline runs out or there would be problems.

Ahead of Guyana’s 50th Independence Anniversary celebrations, King had spearheaded the removal of vendors, minibuses and taxis from outside  Stabroek Market and Demico. He has also ruled out their return, but has given no clear indications where they would go when the deadline reaches.