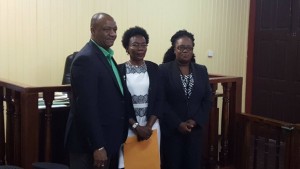 The parents of the two young boys, who perished in a fire at the Children’s Drop-in Centre, would have to await the outcome of a Commission of Inquiry before they are compensated, Minister of State, Joseph Harmon said Friday morning.

“The family would have been contacted by the Ministry of Social Protection and they would have been given some comfort level but insofar as the compensation is concerned we will await the findings of the Commission, he said when asked by Demerara Waves Online News

He was at the time speaking with reporters shortly after Retired Colonel Windee Algernon was sworn in at the Georgetown Magistrates Court as a one-member Commission to inquire into the deaths of Antonio and Joshua George, aged two and six respectively on July 7, 2016.

The Commissioner, Harmon said, would recommend for compensation.

Harmon said a preliminary report would be submitted to President David Granger on July 22, 2016 and the final report by August 15, 2016.

The Guyana government has already taken full responsibility for the boys’ deaths.

Colonel Algernon is expected to inquire into the nature of injuries sustained  by all children, assess the dangers to which children and staff were exposed to at the time of the incident, and whether the conduct of the staff  who were on duty was in conformity with the legal obligations of the State and the Standard Operating Procedures governing the Drop-In Centre.

The Commissioner has also been tasked specifically with determining who should take the blame for the incident, whether there was a failure on the part of State officials to deal appropriately or adequately with matters that gave rise to the loss of lives and whether there were any unsafe or improper arrangements for the care, custody and welfare of the children

Algernon is also required to make comprehensive recommendations to ensure the safety of  Children at the Hadfield Street, Georgetown, Drop-In Centre, improve the effectiveness and adequacy of the current emergency arrangements for fire and any other disaster, interaction between the departments, agencies and service providers and how the sectors can  work together to better protect children and young people who are under the care and supervision of the State.

The Commissioner is expected to interview, among others, the the staff of the Drop-In Centre, children, parents and guardians of children under the care and control of the State at the centre and any other individual or organisation the Commissioner deems appropriate.

2016-07-14
Denis Chabrol
Previous: BK International is out, Puran Brothers is in to manage Haags Bosch landfill
Next: European bank to replace Bank of America as correspondent bank