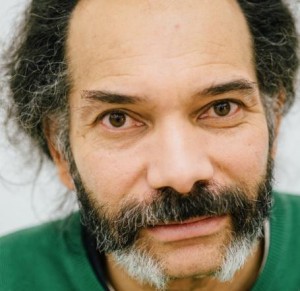 MEET HEW Locke, the renowned south London-based artist and sculptor from Guyana whose eye has been following London commuters around the capital for the last month.

Having showcased his work across the globe, including galleries and museums in Florida, Greece, New York, China and Puerto Rico, the award-winning artist’s latest piece can be seen by commuters all over the London Underground.

Locke was recently commissioned by Transport for London’s Art on the Underground project to design the 24th edition of the tube map cover.

His Tunnel Vision design is a life-size mask made from vibrant cord and string, glued together to mimic the Tube lines. The artist’s own eye glares from the centre.

Locke says: “This commission is a major opportunity for me to make work that is universally available to all and a chance for me to be part of the long tradition of the arts associated with the London Underground.

Despite the fun and vibrant colours of the masks, you can’t help by feel slightly unsettled by the glaring eye – something the 56-year-old was actively trying to achieve.

“I’ve kind of always had a carnival-esque element to my work, but with a bit of edge. That’s what my work tends to be about; it’s about mixing something attractive with something quite surreal and unnerving.”

He continues: “My design is of a mask with a single eye starring out at you. It’s almost like an all-seeing eye. It’s about surveillance and the whole idea of Big Brother always watching. At the same time it could be about someone putting on a mask before they go out to use the Underground.”

In his earlier work, Locke began to use questions of identity and creation of culture to influence his artwork.

The artist’s personal history – he spent the first seven years of his life in Edinburgh before moving to the newly independent Guyana and later returning to London in the 1980s – feeds into his ongoing interest in the links between personal and national identity.

To address themes of history, power, globalism, excess and exotica, Locke often uses recurring motifs, such as royal portraits, insignia and boats.
“My interest in boats has been with me ever since I was a kid. I was born here, but grew up in Guyana,” he says with a strong Guyanese accent. “When I came back, I went by boat and that boat trip stuck with me. 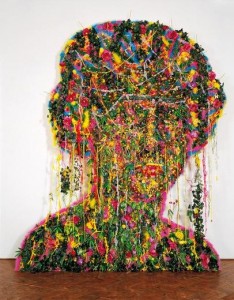 “But also, growing up in Guyana, to go anywhere, you have to go by boat, so boats are kind of in my DNA. And of course, the idea of living in Britain and the whole maritime history is very prominent.”

In recent years Locke has focused on his fascination and ambivalence around ideas and images of ‘Britishness’ in a global context, such as the royal family.

He best known for his eye-popping depictions of the Queen — shiny, ironic critiques of Britain’s imperial past and of the travails of the developing world constructed out of lurid plastic trinkets, foliage and jewels.

Locke’s sculptures and installations are often made from found materials including plastic flowers, colourful fabrics and pound shop bric-a-brac, selected as much for their symbolism as their generic, mass produced feel. Assembled in grotesque baroque fashion, his works mix styles from world cultures and redress notions of heritage, class and collective identity.

Being of Guyanan descent, Locke has often been labelled as a folk artist, a cultural pigeonholing he fervently avoided in his early career.

“My accent was never a problem,” explains the artist, whose permanent sculpture The Jurors (2015) sits in Runnymede, Surrey, created to celebrate the 800th Anniversary of the Magna Carta.

“But back in the early 2000s, I stopped making work in colour for three years. The reason for this was very specific: I’d make something and show it and people would say, ‘wow that’s great, I like that, what carnival did you make this for?’
“They saw the work, not as art, but for some festival or something. It was quite offensive.”

In retaliation, he began branding his work with an ‘export’ label.

“They assumed my work was exported from somewhere else exotic and really it was made by me around the corner in Brixton,” he chuckle