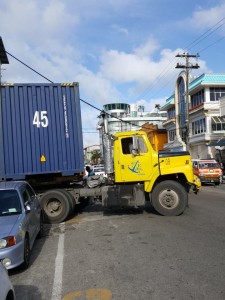 A shipping container that was recently being maneuvered in the heart of commercial Georgetown.

Businesses in Guyana’s capital, Georgetown, will now have to pay the Mayor and City Council GYD$25,000 for the operation of shipping containers, the municipality announced Tuesday.

City Hall said while container users will pay $25,000 to have the storage device parked for 72 hours, Council’s decision also supports a penalty fee of $5000 for every other day the container is left parked in the public space.

The Municipal government said decision was taken unanimously by Councillors at their statutory meeting held on Monday, July 11, 2016.

“The Mayor and City Councilors recognized that previously, business persons and other container operators have been accessing city streets, and other public spaces with those containers free of cost. However the containers are sometimes left parked in public spaces for long periods. They take up much space in especially active locations, and in some cases adds to the congestion situation,” the Town Clerk’s Office said in a statement.

City Council explained that containers- loaded or not- contribute immensely to the destruction of city roads,  broken or bent bridge railings and broken off road shoulders, leaving the city to bear the expense.

The idea, according to Mayor Patricia Chase-Green, is to ensure that containers are not left parked around the city if they are not being used. She explained that the Council was in receipt of complaints by persons who were being affected by the wanton parking of containers in the city, and container trucks using inner city streets and some residential locations during their routes.

The Council had previously published, under Chapter 28:01 the streets to be used by container trucks. The law says that such vehicles were not permitted in certain areas without the permission of the city.

Town Clerk Royston King said that other measures are being implemented to ensure the safe and orderly movement of containers, such as monitoring agents to be stationed at wharf and other ports of entry within the capital.

Stakeholders seeking further clarification on the matter are welcome to visit the Municipality.