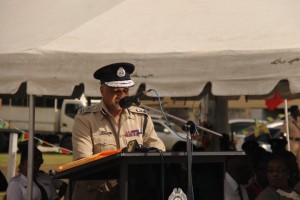 Guyana is getting assistance from Jamaica in boosting its crime and security intelligence-gathering strategies and techniques, Guyana’s Police Commissioner Seelall Persaud announced Wednesday.

Addressing the annual police awards ceremony, he said the Jamaica Constabulary Force (JCF) has begun conducting an assessment of the Guyana Police Force’s (GPF) crime and security intelligence system with the aim of recommending improvements.

He said as soon as the JCF’s draft final report is completed and accepted, the plan would be implemented. “Thereafter, we will pursue with implementing those recommendations and we are likely to see a great change in our intelligence infrastructure and see a great interface between  crime intelligence and security intelligence and further develop pour general capacity to deliver the highly expected services of the people of our communities,” Persaud.

The Police Commissioner later told Demerara Waves Online News that based on his more than 20 years work across the Caribbean, Jamaica “has the best intelligence” in the Anglophone part of the region. “Jamaica, as you know, has a very intense security situation and, therefore, they have the best experience,” he said.

The Guyanese Police Commissioner noted that while crime intelligence has been contributing significantly to solving major crimes, the force has failed to register similar improvements in security intelligence.

The Guyana Police Force has been boasting an 18 percent reduction in all serious crimes from the corresponding period last year to present, a 70 percent “clear-up” on murders reported this year and have solved a number of  cold cases some of them dating back to 10 years. “This speaks to a great improvement in the public trust in the capacity of the force, primarily in the CID (Criminal Investigations Department), but every other department in the force,” he said.

The Smart City project, which is funded by the Inter-American Development Bank (IDB), he said, is expected to boost the GPF’s capacity to tackle crime.