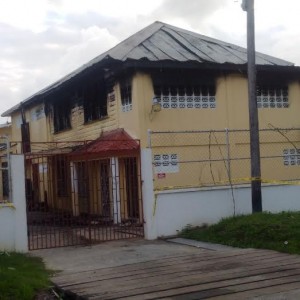 Two children were burnt to death  in a fire that late Thursday night gutted the Children’s Drop-in Centre on Hadfield Street, Georgetown.

The Guyana Police Force identified them as Antonio George, 6 years old and Joshua George, 2 years old
“Investigations have so far revealed that fire began on the western section of the upper flat and as the fire engulfed the building, Antonio George and Joshua George were trapped in the lower flat and their bodies were later found among the debris,” the Guyana Police Force said in a statement.
The 28 other children were not injured and were taken to a child care facility at Sophia. Two girls fainted and were rushed to the Georgetown Public Hospital.

Greene said authorities were told by staff members that the fire began by a security light on the building and quickly swept through the facility. “Tragic things do happen and sometimes we don’t know why,” she told Demerara Waves Online News.

2016-07-07
Denis Chabrol
Previous: Bandits snatch Guysuco payroll
Next: Inquest into allegations made by Barry Dataram completed-Report handed over to Minister of State