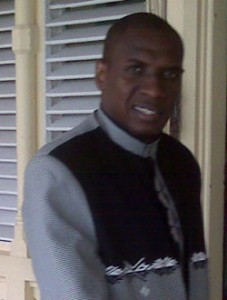 Almost 10 years after Cyon “Picture Boy” Collier gunned down two brothers at Victoria, East Coast Demerara, he was found guilty of murder by a 12-member jury and sentenced to death.

Collier rode up on a motorcycle and shot dead Ray “Sugar” Walcott and Carl “Alo” Andrews on September 23, 2006 while they were playing dominoes at the Victoria Four Corner.

After the jury returned the guilty verdict, High Court Judge, Priya Sewnarine-Beharry told the convict that he was sentenced to death by hanging. “May the Lord have Mercy on your soul,” she said.

Collier expressed dismay at the verdict while at the same time he asked the Judge for mercy and leniency. In a courtroom where the mother of the dead sons was also present, he said he was sorry to Walcott and Andrews’ relatives and asked for their forgiveness.

Walcott and Andrews’ mother expressed symbolic satisfaction with the verdict by lifting her hands and closing her eyes as Picture Boy’s photograph was snapped for the last time by news photographers.